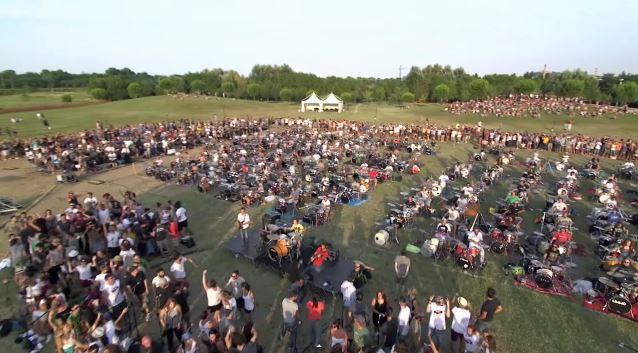 A video surfaced on Thursday (July 30) of a thousand musicians, dubbed "The Rockin'1000," playing the FOO FIGHTERS hit "Learn to Fly" as a way to ask the band to come and play in Cesena, Italy. FOO FIGHTERS responded via their Twitter account, writing, "Che bello, Cesena," which translates to "How lovely, Cesena" or "How nice, Cesena." The band, however, did not commit to performing in the town.

A previous fan attempt to get the band to play in Richmond, Virginia, by raising money through the sale of tickets, was met with success as the band performed there last September.

Meanwhile, frontman Dave Grohl denied rumors that the FOO FIGHTERS were already signed up to headline next year's Glastonbury Festival in the U.K. after missing last month's event due to Grohl's broken leg.

Grohl told Q magazine, "I read all of those articles saying we confirmed for next year and just laughed. Total fucking bullshit. Of course, I'd love to come back and play Glastonbury! But don't believe everything that you read, kids…"

The FOO FIGHTERS will begin the next leg of their North American tour on August 12 in Edmonton, Canada. After breaking his leg in a stage fall in Sweden last month, Grohl has played the first part of the trek while seated on a light-up throne with his leg in a cast.