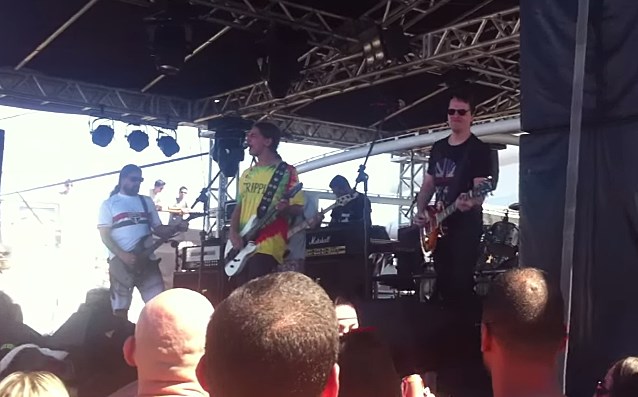 Lombardo makes a guest appearance on SEPULTURA's latest album, "The Mediator Between Head And Hands Must Be The Heart", which came out in October 2013 via Nuclear Blast Records.

Speaking to JoelGausten.com, Lombardo explained how his collaboration with SEPULTURA came about. "I was basically walking on the beach with my dog and my daughter," he remembered. "I text messaged Ross Robinson, who was the producer of [SEPULTURA's] new record. I said, 'Hey, man. How are you? I'm here with my dog. Can I go by? I want to introduce my dog to your dog.' They're both kind of the same; one's a Labrador and the other one's a Pointer. He said, 'Do you feel like playing drums?' That's how he answered; he didn't answer me with, 'Hey, man. How are you?' It was like, 'Hey, wanna play some drums?' I was like, 'Of course!' He said, 'Okay, come on over.' I went upstairs, and there were all the SEPULTURA guys, and they were setting up two drum sets face to face. That's when I met [current SEPULTURA drummer] Eloy [Casagrande]. I had seen of video footage of his performances, and I was definitely impressed. We got together and started jamming, and we recorded that little section. Man, it was good fun. It was spontaneous, and it was creative. I thrive in that environment. I don't need no preparation; just put me in a situation and let's see what happens."

Andreas and his wife, Patricia Perissinotto Kisser, have three children together: Giulia, Yohan and Enzo.