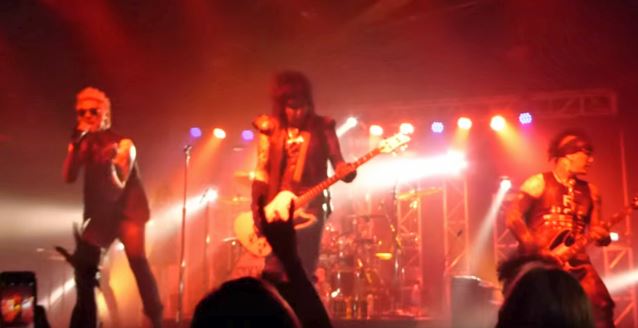 Fan-filmed video footage of SIXX:A.M., the band featuring MÖTLEY CRÜE bassist Nikki Sixx alongside guitarist DJ Ashba and vocalist James Michael, performing on May 3 at Cannery Ballroom in Nashville, Tennessee can be seen below.

According to music industry web site Hits Daily Double, the first volume of "Prayers For The Damned", the new double album from SIXX:A.M., is likely to sell between 16,000 and 20,000 copies in the United States in its first week of release. The CD was released on April 29 via Eleven Seven Music.

"When we toured our last record (2014's 'Modern Vintage'),it was the first time we had really been a band that existed outside of the studio," confessed Michael. "Playing those songs we finally realized how much fun this band is and finally admitted to ourselves that, yes, we are a proper live band. DJ took the decision to leave GUNS N' ROSES and Nikki wrapped up MÖTLEY CRÜE. There are no distractions anymore and we're all 100% dedicated to SIXX:A.M. now."

"We've been together for seven years and I believe we've just got tighter and tighter in that time," added Ashba. "For me, on our last tour, something clicked inside. What touched me most was seeing what our songs had some to mean to people."

"It's absolutely time for us to treat this band with the time and energy it deserves," echoed Sixx. "It's a gang, a tribe and we're incredibly proud of that."