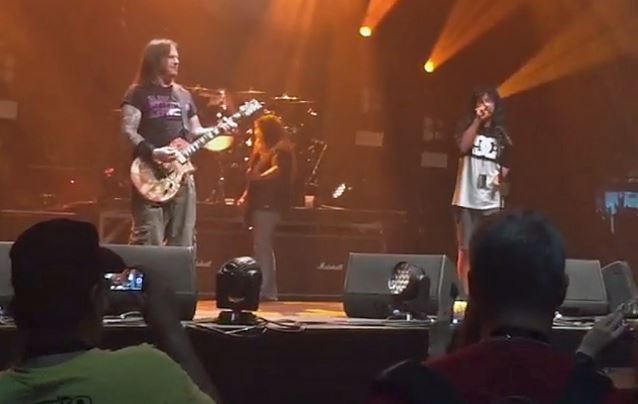 ANTHRAX singer Joey Belladonna joined SLAYER members Tom Araya (bass, vocals),Gary Holt (guitar) and Paul Bostaph (drums) on stage during soundcheck before tonight's concert at Métropolis in Montreal, Quebec, Canada to run through an impromptu cover of the Bryan Adams classic "Summer Of '69". Video footage of the performance can be seen below (courtesy of ANTHRAX guitarist Jonathan Donais).

SLAYER's seven-week North American tour with ANTHRAX and DEATH ANGEL kicked off on September 9 in Cleveland.

Back in March, footage surfaced of SLAYER performing the LYNYRD SKYNYRD classic "Free Bird" during soundcheck, with TESTAMENT's Alex Skolnick helping out on second guitar. Holt later told Full Metal Jackie about the jam: "I'm a classic rock guy. That was my upbringing before I ever evolved into heavy metal. I'm the youngest out of six kids and five of us are boys. I grew up listening to what my brothers were listening to, which included stuff like SKYNYRD. Tom was the one who actually got that started and then we pulled out Skolnick into it. That was some of the most fun I've ever had on the stage in my life —playing 'Free Bird' at soundcheck."

When he is not busy touring and recording with ANTHRAX, Belladonna plays drums and sings for a classic-rock covers band called CHIEF BIG WAY. The upstate New York-based group, which also features Dave Mickelson on bass, Joe Precourt on guitar and John Goodwin on keyboards, plays versions of songs from JOURNEY, AC/DC, ZZ TOP, BOSTON, CHEAP TRICK, FOREIGNER, PINK FLOYD, VAN HALEN, COLLECTIVE SOUL, THE WHO, THE DOORS, SHINEDOWN and BON JOVI, among others.

In a 2005 interview with MusicDish, Belladonna was asked about the rumor that he came to the table with a JOURNEY tune during his 1985 audition for ANTHRAX. "Actually, what happened was I went into the room and they said, 'Just go on in,' and they hadn't heard me sing," he said. "They'd heard of me and they asked me to come in, but we were going in to start tracking and stuff, to get the mic set up and all that and they said, 'Let's get you in there and get you warmed up.' I hit the mic and belted out some JOURNEY… I think it was [the song] 'Lights'. I didn't know what the hell I was getting into in the first place. I just wanted to lay some vocals or something. Just to kinda give an idea and that's what happened. It wasn't really anything more than that. I just kinda belched it out. I think I did 'Oh Sherrie' [written by JOURNEY singer Steve Perry], too, or something. I dunno why, but I just did. It was something off the top of my head I could do a cappella and it was kinda challenging. I thought maybe in range or something that would be kind of intriguing. It was definitely one they weren't expecting." 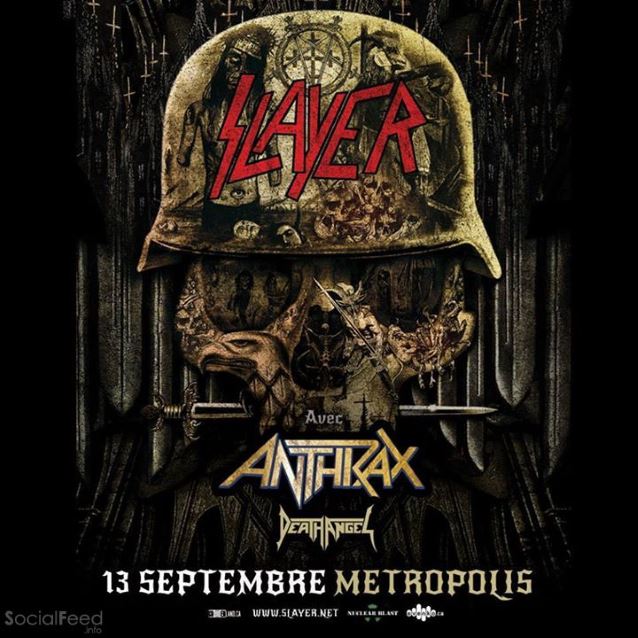