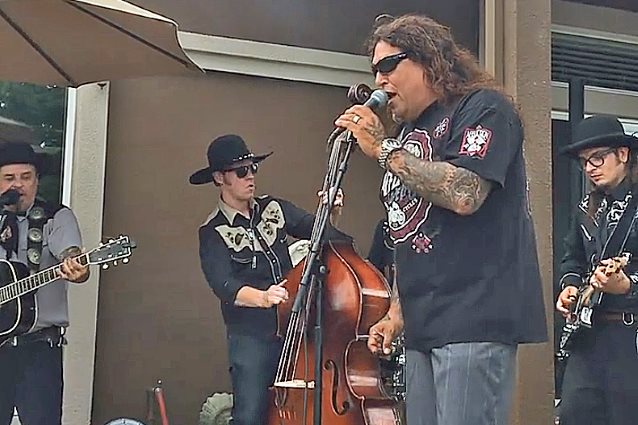 TESTAMENT frontman Chuck Billy sang a rockabilly version of MOTÖRHEAD's classic song "Ace Of Spades" with the OUTLAW CASH PROPHETS at a friend's surprise 50th-birthday party on Saturday, May 21 in Discovery Bay, California. Video footage of their rendition can be seen below.

Billy recently confirmed that TESTAMENT's forthcoming eleventh studio album will be titled "The Brotherhood Of The Snake". The record's title track, according to TESTAMENT guitarist Eric Peterson, will feature "the fastest blast" beat drummer Gene Hoglan has ever played, a sentiment that was echoed by Billy. "That's definitely a standout [song], but a lot of this record, the new record, is definitely gonna be geared up to a little more faster than 'Dark Roots Of Earth' record, definitely a little more aggressive musically, for sure, probably vocally as well," Chuck said. "I think I'll probably attack with a little more heavier voice on this one. I'll kind of feel my way through the song, which voice to use. But there's definitely gonna be some 'Demonic' [-type] stuff, but again like 'The Gathering', 'cause I think I did a little bit of everything on that record, which that's what we'd like to accomplish."

TESTAMENT's U.S. tour with SLAYER and CARCASS kicked off on February 19 in Chicago, Illinois and ended on March 26 in Las Vegas, Nevada.