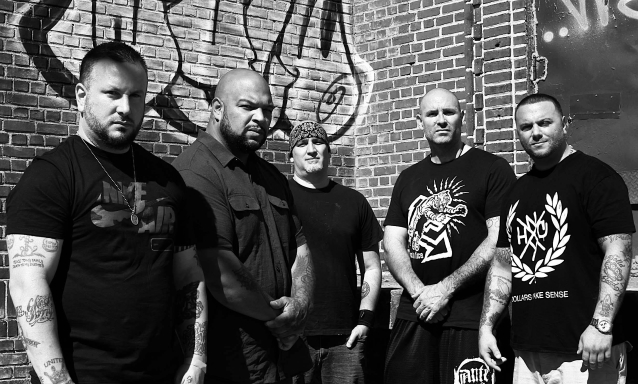 Stroudsberg, Pennsylvania's WISDOM IN CHAINS has released a music video for its version of the TWISTED SISTER classic "Burn In Hell". The clip was filmed in the band's practice space and was originally livestreamed on social media.

As viewers from around the globe chimed in with comments (some complimentary, some taking the piss) including Hoya (MADBALL) and Craig Setari (SICK OF IT ALL) ask for a song request. After turning down quite a few, the unlikely request for TWISTED SISTER comes in, which the band is only too happy to fulfill — though this is a much more brutal hardcore punk version than the '80s glam metal original.

Speaking on the tune, WISDOM IN CHAINS released the following statement: "We always loved TWISTED SISTER and maintain till this day that they are the best band to ever wear make-up. Musically they are so catchy, and vocally, Dee [Snider] is one of the best in the game. 'Burn In Hell' has it all — the evil vibe, it's hard, straight up.. we love this jam!"

WISDOM IN CHAINS is considered the working man's hardcore band espousing blue-collar ethics with a raw n' direct approach. The group has been going strong for close to two decades and has completed international tours with such mainstays of the genre such as MADBALL, H2O, COMEBACK KID and many more. Their latest album, "Nothing In Nature Respects Weakness", was released in 2018 via Fast Break! Records.