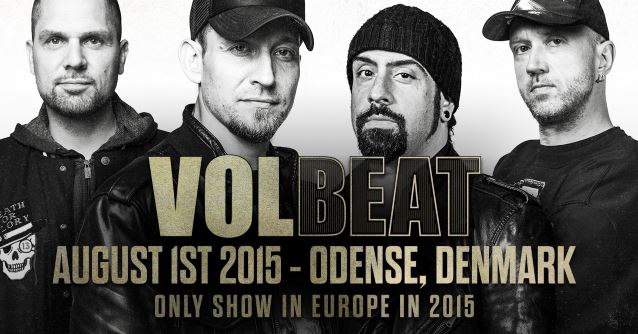 Fan-filmed video footage of Danish/American metal rock 'n' rollers VOLBEAT performing a brand new song, "The Devil's Bleeding Crown", in full live for the first time on Saturday, August 1 in front of over 37,000 people at Tusindarsskoven in Odense, Denmark can be seen below.

Speaking about the progress of the songwriting sessions for VOLBEAT's follow-up to 2013's "Outlaw Gentlemen & Shady Ladies" album, guitarist/vocalist Michael Poulsen told the Columbus, Ohio radio station 99.7 The Blitz at the Rock On The Range festival in May: "Right now I'm writing on the road. We have rehearsed around five new songs in soundcheck. So, hopefully, before we go home in a couple of weeks, we will have six new songs and then I have to finish the second half [of the album] when I come home. And then we'll be ready for the studio around November."

VOLBEAT recently completed a North American tor with support from ANTHRAX and CROBOT.