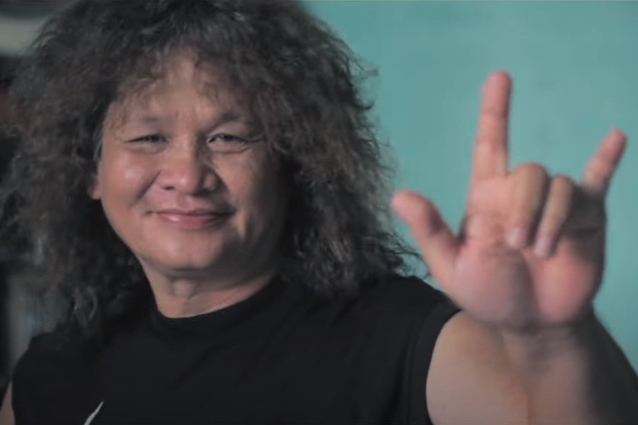 "Saigon Metalhood", an hour-long documentary which follows three generations of Vietnamese metalheads through the origins of heavy metal in Vietnam to the current struggles of today's scene, is now available for streaming on Amazon and Vimeo.

Grizzled Saigonese rock legend Trung Thanh Sago got his start as a teen shredding for U.S. soldiers in the old South Vietnam, and represents the "past." He tells his life story, walking us through the origins of rock and metal in Vietnam, and the significant obstacles himself and the scene have faced. Now in the later stages of his life, he speaks about losing his friends to emigration and death, ongoing health problems, and the scene today. Characterising the "present" is former vanguard of Vietnamese extreme music, the luminary Trung Loki, recently back on the scene after a habitual absence. Initially cautious and brooding, he puffs on cigarettes while opening up about lost love, methamphetamine addiction, harrowing rehab experiences and the derailment of the scene he was so instrumental in both building and destroying.

War, politics, infighting, addiction, and an indifferent, often hostile society all contribute to the woes of the metal community in Vietnam, but in the words of Loki: "People don't care about us… and we don't even care about them."

Lair Of The Alchemist, a YouTube channel dedicated to discussing all things heavy metal and hard rock, recently had the chance to interview the "Saigon Metalhood" filmmakers. You can check out the chat below.

Sometimes a band must pass away...

Trung Loki shares his thoughts on bands growing old and drops a hot take about Metallica.