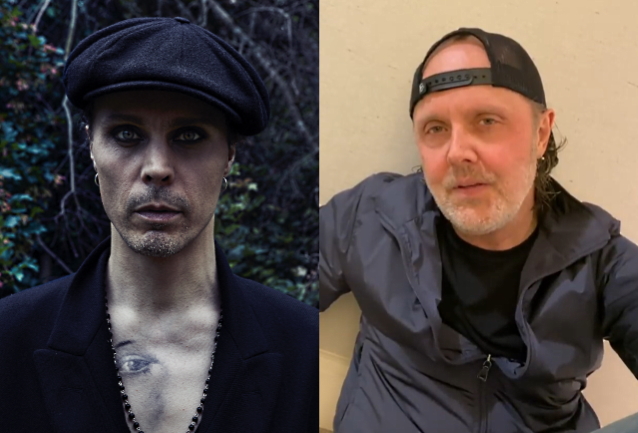 In a new interview with Australia's Heavy, former HIM frontman Ville Valo weighed in on METALLICA's 2004 documentary, "Metallica: Some Kind Of Monster", which followed the legendary metal band through the three most turbulent years of their long career, during which they battled through addiction, lineup changes, fan backlash, personal turmoil and the near-disintegration of the group while making their "St. Anger" album. He said (as transcribed by BLABBERMOUTH.NET): "To be honest with you, METALLICA can do whatever they wanna do after the great albums they've made. And they were trying to survive as well, and I wouldn't be surprised if there's a ton of bands who've gone through very similar things. But METALLICA, for whatever reason, chose to do it in public. I think that's the main thing that is the issue here.

"I'm a very… a bit shy, or I don't wanna draw too much attention to myself, as we Finns usually, it's the way we are — a bit hermit-like," he explained. "So it feels so weird, the whole METALLICA thing, when it came out. Because in our culture, it's important to keep some stuff to yourself. Or the other way around — it's not necessary to open up everything [to the outside world]. But then again, maybe that was the thing they needed to do to be able to make great albums afterwards."

Valo then proceeded to take his METALLICA praise even further, saying: "I love Lars [Ulrich, METALLICA drummer]. I think after [legendary LED ZEPPELIN drummer] John Bonham, Lars is probably one of the most important drummers. He has such a recognizable style."

While initially helping METALLICA towards restoring band harmony, "Metallica: Some Kind Of Monster" showed "performance coach" Phil Towle, a former psychotherapist who was brought into the picture in January 2001 to help James Hetfield, Kirk Hammett and Ulrich repair their relationship with Jason Newsted, attempting to increasingly insert himself into the band's creative process, submitting lyrics for the album and even attempting to join them on the road. "Some Kind Of Monster" also documented Hetfield's spiral into alcoholism and decision to check himself into a rehab facility. Hetfield's re-emergence from rehab is when the film really gets into gear, with the chief worry in his mind whether or not he could do METALLICA sober.