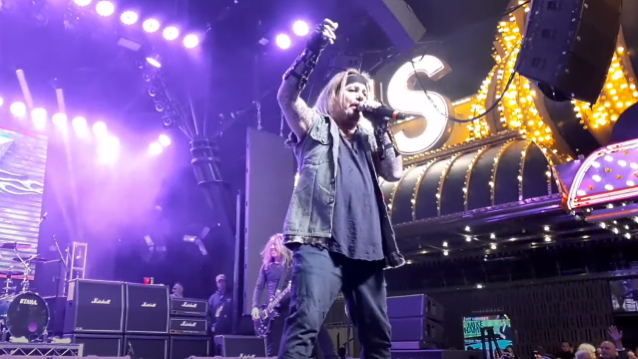 Fan-filmed video footage of Vince's concert can be seen below.

Fremont Street Experience marked Neil's return to the stage after he reportedly broke his ribs while performing with his solo band at the Monsters On The Mountain festival at LeConte Center in Pigeon Forge, Tennessee on October 15. Fan-filmed video of that gig showed the 60-year-old rocker walking to the front of the stage with his guitar strapped around him. He encouraged the crowd to clap along while playing the 1989 MÖTLEY CRÜE hit "Don't Go Away Mad (Just Go Away)" when he suddenly fell and dropped out of the camera's view almost instantly. TMZ later reported that there was a small gap between the speaker and the stage that Neil didn't notice. His roadie and a security guy helped him get to his feet, and Vince "limped away."

A former Las Vegas resident, Vince served 10 days of a 15-day DUI sentence in 2011 in connection with a June 2010 incident when he was speeding and weaving between lanes on Desert Inn Road west of Paradise Road, near the Las Vegas Strip, authorities said.

Thanksgiving is for family; #DrinksGiving is all about friends tying one on for a good, old-fashioned drink fest...