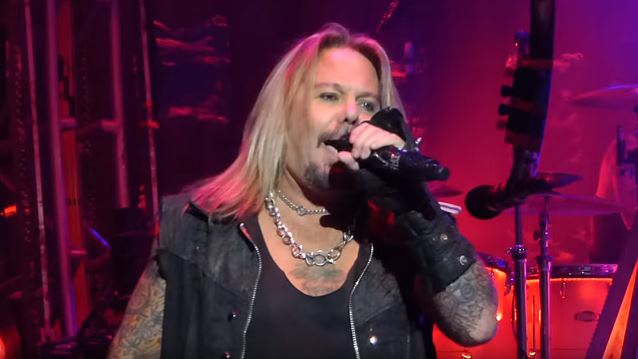 According to TMZ, MÖTLEY CRÜE frontman Vince Neil has been charged with misdemeanor battery in connection with an incident where he allegedly assaulted an autograph seeker. The alleged victim told police that the singer came up from behind and grabbed her by the hair.

Neil claimed he only "pushed past" the female autograph seeker, but officers concluded after reviewing a surveillance video that Vince did in fact pull the woman by her hair, according to TMZ.

Cameras also captured the woman taking pics with Carrot Top before she saw Nicolas Cage. She claims she said, "Nicolas, I love you" and followed Cage before being pulled down by Neil, who was having lunch with the comedian and the actor.

If convicted, Neil faces six months in prison stemming from the battery charges.

The singer's attorney, David Chesnoff, told the Daily News that "people shouldn't pre-judge things until all the facts are in."

The night before, Vince was was seen checking out the newly opened T-Mobile Arena in Vegas with friends, including former "Lifestyles Of The Rich And Famous" host Robin Leach.

Cage and Neil are longtime friends who were previously photographed together at the rocker's strip club back in 2012.