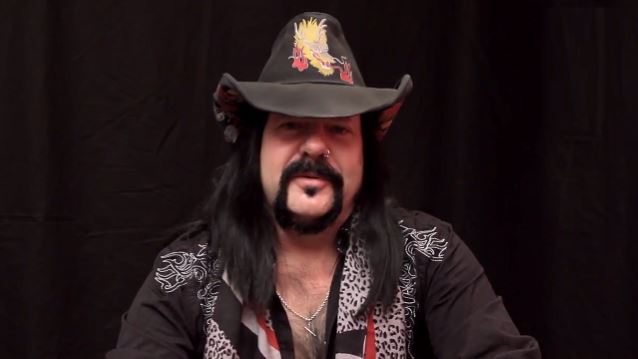 VINNIE PAUL: 'If You Live In The Past, You Don't Have Any Future'

Former PANTERA and current HELLYEAH drummer Vinnie Paul Abbott recently spoke to U.K's Metal Hammer magazine about the 20th-anniversary reissues of PANTERA's early major-label releases, including "Far Beyond Driven", which came out this past spring. You can now watch the clip below.

Asked about the persistent talk of a hypothetical PANTERA reunion featuring Zakk Wylde (BLACK LABEL SOCIETY, OZZY OSBOURNE) filling in for the late "Dimebag" Darrell Abbott on guitar, Vinnie told Brazil's "Wikimetal": "The bottom is they call it a reunion, and that means to bring the original members back, and we can't bring Dime back, and he was such a huge part of PANTERA. I don't wanna damage or tarnish the legacy of him or the band. We had 14 amazing years together and it's time for everybody to move on. And I have definitely moved on in my life. I don't live in the past. I like to live for today and what's coming up tomorrow, and I love what we're doing with HELLYEAH. And that's my focus and that's my goal, man."

Regarding the PANTERA reissues, Vinnie said: "The bottom line is [the label is] gonna do it, whether we participate or not. And so, we all put our best effort in to finding the best stuff that we can to put in there to make it a very special package for the fans, 'cause we did have the greatest fans in the world."

He continued: "Like I said, I don't live in the past, so I don't sit around and listen to those records or think about them. I was part of the remastering, and that was probably the first time I'd heard 'Far Beyond Driven' in 20 years; I mean, honestly, since we finished making it. And it blew me away. It still sounds just as fresh today as it did back then to me, and I think it was definitely ahead of its time, and [PANTERA was] definitely an earth-shaking band that really touched so many people and inspired a lot of other bands."