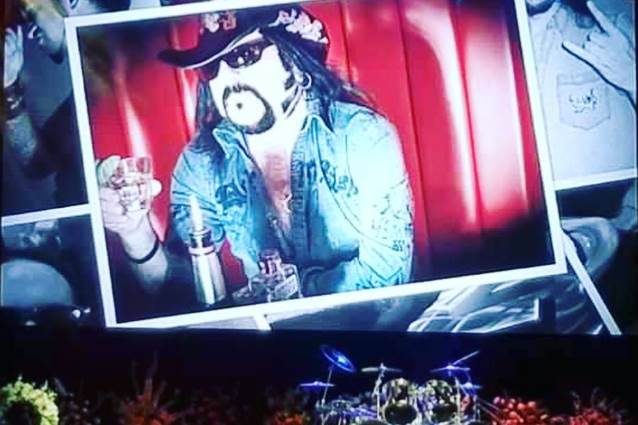 CBS DFW has uploaded a two-minute video report on the public memorial for Vinnie Paul Abbott, which was held on Sunday (July 1) at Bomb Factory in Dallas, Texas.

"We're not mourning Vinnie. Of course, the world is sad that he's gone… but Vinnie's memory will live on through his music," said Guy Sykes, former PANTERA tour manager.

"To me, Vinnie was as solid as a rock. He is the last person I ever expected to hear somebody say he passed away suddenly, for no reason," said 97.1 The Eagle's Cindy Scull.

According to the Forth Worth Star Telegram, the stage at "Vinnie Paul: A Public Celebration Of Life" was decorated with flowers from various rock stars and other celebrities, including Kid Rock, comedian Carrot Top, BLACK SABBATH's Geezer Butler and bands such as MEGADETH, ANTHRAX, DISTURBED, SLAYER and ALICE IN CHAINS. SABBATH singer Ozzy Osbourne and his wife, Sharon, sent an arrangement in the shape of a drum.

A brief video message from ex-PANTERA vocalist Philip Anselmo was played at the event, with Anselmo saying, "Vince, always have love in my heart for you, man. Rest in peace." It marked the first time Anselmo publicly commented on Vinnie Paul's death.

Sunday's public event also included emotional tributes from a number of Vinnie's fellow musicians, some of whom appeared in person while others sent short video speeches expressing their affection for the fallen drummer.

I was cool until @coreytaylor came on with his remembrance. My heart breaks for you and the many like you that feel your pain. Gone, but not forgotten. He will live through us all 🤘🏻✌🏻Celebrating a legend #rip #vinniepaul #metal #hellyeah #pantera #damageplan #cowboysfromhell

The memorial service for the legendary drummer Vinnie Paul started, @rockfeedofficial is there and recording live on YT on his channel Rock Feed, go watch to see and inside view of the memorial service or Vinnie Paul. Rest in Power Vinnie You along with your brother are legends and will remain legends for all eternity. #vinniepaul #rip #restinpower #pantera #damageplan #rebelvsrebel #hellyeahband #drummer #legend

All in line for Vinnie!! #vinniepaul #rip #pantera #damageplan #hellyeah