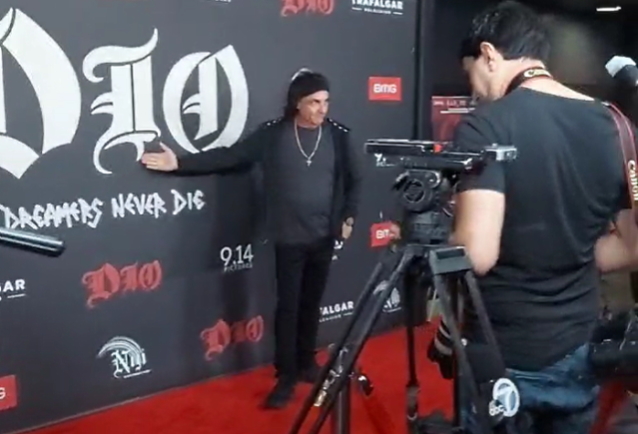 "Dio: Dreamers Never Die" will be presented in more than 500 cinemas worldwide by Trafalgar Releasing and BMG for two days only on Wednesday, September 28 and Sunday, October 2. Executive-produced by Dio's widow and longtime manager Wendy Dio and fully authorized by the artist's estate, "Dio: Dreamers Never Die" delves deep into the singer's incredible rise from a '50s doo-wop crooner to his early rock days in ELF and Ritchie Blackmore's RAINBOW, to replacing Ozzy Osbourne in BLACK SABBATH, and finally cementing his rock star status with his own band, DIO. The film incorporates never-before-seen footage and personal photos, as well as offering intimate scenes with his closest peers, family, and friends, among them Wendy, Tony Iommi, Geezer Butler, Glenn Hughes, Vinny Appice, Lita Ford, Rob Halford, Sebastian Bach, Eddie Trunk and Jack Black, as they bring viewers inside the life of one of rock and roll's true heroes and one of the most beloved figures in rock.

At this year's SXSW Film Festival, several music personalities who were involved in the making of the film — Wendy, Butler and Bach — took part in a panel, "Dreamers Never Die: The Enduring Power Of Metal" panel, hosted by SiriusXM's Eddie Trunk at Austin Convention Center.

An amazing night in Hollywood for the LA premiere of DIO: Dreamers Never Die! Big thanks to Joey Belladonna from…

Photos from the Hollywood premiere of Dio: Dreamers Never Die! What an amazing night. Thank you to everyone who came to...

If you love music, the Dio Dreamers Never Die movie is a 10! The premier had me laughing, crying, and singing through...

#tbt From 2 nights ago at the premiere of ‘Dio Dreamers Never Die’
What a film! Inspiring, emocional and of course...

So many dear friends and fellow musicians at the Ronnie James Dio “Dreamers Never Die” movie premiere. Many more friends...

Watched the Dio “Dreamers Never Die” movie premiere tonight. Saw all my touring “Dio Band” guys and many, many friends...

Three Amigos At The Premier Of The Documentary
🤘Dio….Dreamers Never Die🤘
A Very Successful Night For Wendy & Ronnie🌈
Coming To A Theater Near You ⚔️

Just attended the premiere of the Dio Documentary “Dreamers Never Die” in Hollywood. Excellent film. Now doing the after party.

Great event last night at the Mann’s Chinese Theatre in Hollywood for the premiere of DIO: DREAMERS NEVER DIE… a...

Great event last night at the Mann’s Chinese Theatre in Hollywood for the premiere of DIO: DREAMERS NEVER DIE… a...

Had a great time at the premiere of “Dio: Dreamers Never Die”. Great film, be sure to check it out, Ronnie is such a...

So many dear friends and fellow musicians at the Ronnie James Dio “Dreamers Never Die” movie premiere. Many more friends...

Posted by Tony Franklin The Fretless Monster on Thursday, September 22, 2022