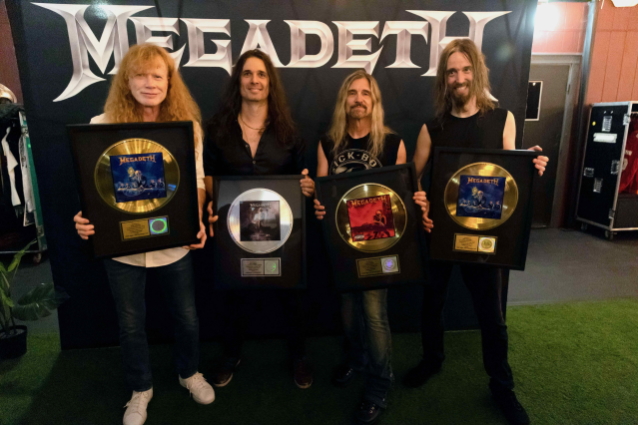 Thrash metal pioneers and metal icons MEGADETH were presented with plaques to commemorate the RIAA (Recording Industry Association of America) certification for platinum sales of 1992's "Symphony Of Destruction" and the gold status of 1986's "Peace Sells…But Who's Buying?" and 1990's "Holy Wars…The Punishment Due". The presentation was held on August 24 after they performed to a packed house at FivePoint Amphitheatre in Irvine, California as the support act for FIVE FINGER DEATH PUNCH.

MEGADETH guitarist Kiko Loureiro has uploaded video of the plaque presentation to his YouTube channel. Check out the clip below.

According to Billboard, MEGADETH's latest album, "The Sick, The Dying... And The Dead!", sold 48,000 equivalent album units in the U.S. in its first week of release to land at position No. 3 on the Billboard 200 chart. It marked MEGADETH's eighth top 10-charting album. Of "The Sick, The Dying... And The Dead!"'s 48,000 units earned for the week, album sales comprise 45,000, SEA units comprise 3,000 and TEA units comprise a neglible sum.

"The Sick, The Dying... And The Dead!" consolidates a furious return to form that began with the Grammy-winning "Dystopia", while pushing forward musically and marking mainman Dave Mustaine's recent triumph over throat cancer. Reuniting Dave with co-producer Chris Rakestraw (DANZIG, PARKWAY DRIVE),who together helmed 2016's "Dystopia", the album was recorded at Mustaine's home studio in Nashville, Tennessee, with Loureiro and drummer Dirk Verbeuren. Bassist Steve DiGiorgio temporarily stepped in to record the album. With the kick-off of MEGADETH's recent tour, MEGADETH alumnus James LoMenzo rejoined the MEGADETH family as permanent bass player.