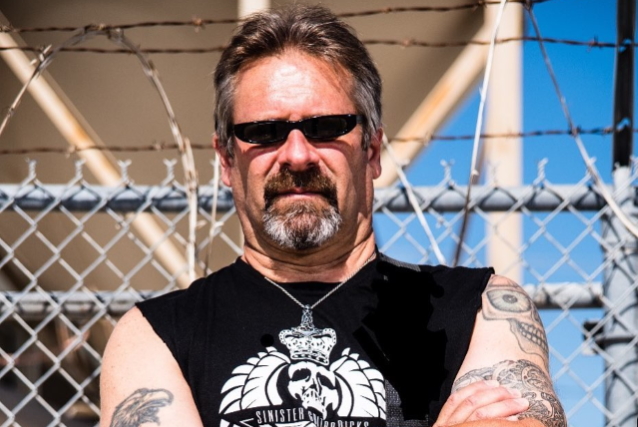 Says the band: "VIO-LENCE would like to thank Ray Vegas for all his hard work and contributions to this band. It's been an incredible year bringing VIO back to life and Ray was an integral part in our success. We wish him all the best.

"The band will perform in Puerto Rico this weekend as a four-piece and Bobby will start later in February when the band goes to Japan, Australia [and] New Zealand. All shows will be honored as scheduled."

Although MACHINE HEAD frontman Robb Flynn was part of VIO-LENCE's classic incarnation and played on the band's debut album, "Eternal Nightmare", he wasn't contacted about doing the comeback shows.

Demmel told Australia's Heavy magazine about VIO-LENCE's comeback: "This whole thing kind of started slow, right after I quit MACHINE HEAD and did a little bridge thing with SLAYER [filling in for Gary Holt]. Sean reached out about doing a couple of shows, and I was pretty floored, because he wasn't looking too good the last time I saw him. [Editor's note: Killian received a liver transplant in 2018.]… My only concern was Sean, and how he was physically. I think that all the other things could be put into place, but there's no VIO-LENCE without Sean Killian. [It was about] making sure that he was going to be good, and be able to pull it off. I didn't want to go out there and just kind of prop him up and have him just be going through some — not midlife crisis, but some sort of thing that he just wanted to do. I wanted it to be quality, because we've always put on a pretty quality product whenever we got together and jammed."

Asked about the prospect of new VIO-LENCE music, Phil said: "We're just kind of enjoying getting through the shows and playing with each other. We're going to be getting to a part where we're traveling together, so we're still kind of feeling each other out in that sense. New music? Sean's itching to write some new music. I'm not itching as hard. I've got a lot on my plate. VIO-LENCE is definitely a priority, but that's just a step I haven't... It's hard, because you have this comeback, and then you play the songs, and you want to be good. I don't want to put out something that isn't as good as 'Eternal Nightmare' or some of the songs from 'Oppressing [The Masses]'. I want to have something that's quality. I want to be with these guys long enough to know that that can happen, because I don't want to put out something shitty. I don't want to taint the feeling that people would have, because I know the live show's there, but I don't know that the creative part, that aspect of it, is there yet. Until I'm sure of that, I just kind of want to enjoy what we're doing now. [We're] just really trying to be kind of delicate with it. All the fun we're having, I don't want to fuck it up."