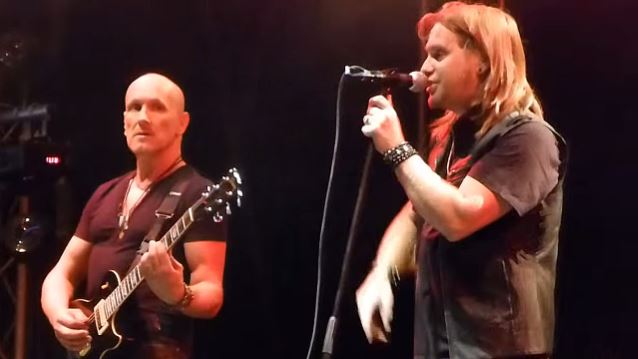 VIVIAN CAMPBELL: I Wouldn't Be Doing LAST IN LINE If RONNIE JAMES DIO Was Still Alive

During a a brand new interview for VH1 Classic "That Metal Show" co-host Eddie Trunk's podcast, "Eddie Trunk Podcast", DEF LEPPARD guitarist Vivian Campbell spoke about the status of his other band, LAST IN LINE, which he launched in 2012 with fellow former DIO members Vinny Appice (drums),Jimmy Bain (bass) and Claude Schnell (keyboards),along with singer Andrew Freeman, who has previously fronted HURRICANE and LYNCH MOB. A few excerpts from the chat follow (transcribed by BLABBERMOUTH.NET).

On LAST IN LINE's decision to write new material and record an album after initially only playing early DIO classics during their live shows:

Vivian: "It was never really the intention [to write new songs] from the start. Originally, we just wanted to do some gigs and go out and play again, 'cause it was just exhilarating to play with Vinny Appice and Jimmy Bain again. So… I don't know at what stage it changed. But we started jamming some song ideas. And it feels very effortless to create with these guys. The way that we did [DIO's classic debut album] 'Holy Diver' was, for the most part, Jimmy Bain and myself, we were roommates at the time, we would go in the rehearsal room with Vinny, and the three of us would just kick around riff ideas and we'd come up with what we would think would sound like a good verse, a good bridge, a good chorus, and we'd kind of do a loose arrangement. Ronnie would come in. If he liked what we were playing, he was very, very quick in coming up with a melody and a lyric idea, and within 48 hours, we'd have a song done. It was very organic and very, very quick. And the same process is what we employed for this record, and it's worked amazingly. I mean, Jimmy and Vinny and I in a rehearsal room…. Andy's been doing the '[Raiding The] Rock Vault' thing out of Vegas for the last year or so, so he wasn't always available to us. It wasn't that we were excluding him at that initial process, but he just wasn't literally physically there. So we'd do stuff, Vinny'd record it, he'd send MP3s, and next day Andy would show up and he'd have a melody and a lyric. And it's so easy and so effortless to do it. It just kind of seemed like the [natural] progression for us to actually go in and make a record. And then having [producer] Jeff [Pilson] do it was just like a Godsend."

On whether the LAST IN LINE material sounds like the classic DIO albums:

Vivian: "The majority of it… Well, actually, I wouldn't say the majority of it… I would say a good 50 percent of the songs would sound right at home on those first three DIO albums, and the others have a bit more of a modern edge to them. I mean, when you get Vinny and Jimmy and I playing, it sounds like the early DIO records, 'cause that's what it is. Obviously, Andy is a very, very different singer, he's got a very different instrument, and he writes lyrics very differently. I'm very, very impressed with where Andy has gone lyrically on the record, too; that's another thing. So it's great. It is so epic sounding. We've got some amazing songs on this, and I'm hyper excited about it, as you can probably tell."

On LAST IN LINE being the most guitar-heavy album he has made in years:

Vivian: "It certainly is, and it's been exhilirating and it's been challenging. And I've embraced the challenge; I really have. It's been fun to do. It's part of a slow process to get me back to this place. It kind of started in early 2011 when I did my little THIN LIZZY stunt guitar tour in Europe. Going back and playing those LIZZY songs that I grew up playing that helped shape me as a guitar player, it kind of lit this fire under my ass again to wanna play. And it was as a result of that that I got together with Jimmy and Vinny and started jamming with them. And that's what led to the LAST IN LINE project, and that's what's led us to here."

On being uncomfortable with the "guitar hero" tag:

Vivian: "I'm definitely a reluctant guitar hero. I've never felt comfortable with certain aspects of that role, but yet it's something that I find pretty natural to be. It's strange condtradiction, I tell you. But I certainly feel right at home doing with Jimmy and Vinny.

"It took me a lot of time to appreciate what I was doing on those [early DIO] records. I was never happy with my guitar playing in my 20s. Having to go out and do shows over the last couple of years with LAST IN LINE, I had to relearn the solos that were on the record, I had to learn them note for note, because they'd been ingrained on those records for 30 years. And so if people were coming to see us, they would expect to hear the solos as they were put on the record. Now, back in the day, I never really played them exactly the same twice. Sometimes I did, sometimes I didn't, but I'd kind of wing it, and sometimes it would work, and sometimes it would [be] a pile of poo. Relearning your old work kind of gives you a different appreciation and understanding of it. And so I'm a lot more comfortable with playing that [stuff], but I'm still kind of uncomfortable with being a guitar hero, to be honest. It's a very hard thing for me to verbalize. However, I always felt it was easier for me to do it live than it is in the studio. That was another issue too, and that issue with me has never gone away. I feel very self-conscious playing around people in the studio. And I think that's probably because… in fact, I know it's because that's the creative part of the process. I'm still looking for something. I get a little embarrassed about doing that in public. But when you're actually playing live, you're doing something that's already been created, you're recreating something that already exists, so it's a little bit more straightforward."

On whether his much-publicized differences with Ronnie James Dio were rooted in business or if there was a personal element to it as well:

Vivian: "Well, it's hard to nutshell; it's not a black-and-white issue. I know it wasn't all business. There were personal things too. I mean, there were times when Ronnie and I got along really, really well, and then there were times when we didn't. But it was a difficult relationship, I've gotta say, from the get-go, for the most part. I think different people in life have different relationships with different people. I mean, not everyone that you meet in your 24 hours of a day you treat the same — you have different relationships, and they're dependent upon the interaction between you and the other person. I saw very, very sweet, very kind aspects of Ronnie's personality, but I also saw very dark and very bitter ones. But that didn't define who he was. I wouldn't define him as being one thing or the other. Human beings are complicated, and relationships are the most complicated part of it. So there was something about Ronnie and I that didn't fit on a personal level. And it's not something that I can find a catchphrase for. I certainly had a lot of respect for him as a professional — there's no doubt about that — and I'm happy to say that I think he had a lot of respect for me in that regard also. We made great music together, and it's unfortunate that it didn't work out. The business side of it all… So many people keep pointing towards the business aspect of it as being what broke us up. I'd have to lay most of the blame for that with [Ronnie's wife and manager] Wendy Dio, because she controlled the business aspect of Ronnie's life. And when the band was first formed, there were four people in the room in John Henry's rehearsal studios in north London — there was Ronnie Dio, Jimmy Bain, Vinny Appice and myself — and that's where we shook hands and we formed DIO the band. Somewhere after that, something changed radically — there was a bit of a sea shift — and it became all about… I think… I mean, I don't wanna start a war with this by any means, but it just seemed to me that Wendy never got the memo. She kind of always looked at it as Ronnie and his backing band. And starting off, Ronnie was certainly the star — he was a lot more famous than anyone [else] — but we created the music together. As I said over and over again, we wrote the songs together, we labored to make those records the best that they could be, and we did that because we were told that we were a part of it and that we would be compensated as such after a course of time. And after that course of time, Wendy had a change of heart, and that led to the demise of the band."

On whether it's fair to say that Vivian wouldn't be doing LAST IN LINE if Ronnie was still around and touring the world and recording albums with his own band:

Vivian: "I think that's fair to say. I think if Ronnie was still [alive] and DIO the band was still out doing it, I don't think we'd be here doing this… It wasn't a deliberate action. It's not like the day I heard the news that Ronnie had passed that I was starting to put the wheels in motion or anything. It's just something that kind of… It organically grew. It just… one thing led to another. But, yeah, it is fair to say… I wouldn't have felt right doing it if Ronnie was still out doing his thing."

On when fans can expect to see the LAST IN LINE album released:

Vivian: "That's a good question. We're signed to Frontiers, the Italian label. Today is the last day of recording, so the record's as good as done. It'll be mixed and mastered within a few weeks, [and then] we'll do the artwork. The original release date that we were looking for was sometime this spring — April, May kind of thing — but, to be honest, I don't know. We're in discussions with Frontiers now when to possibly release the record, because it doesn't make a lot of sense to put it out there if we're not available to support it. And I've got a really, really big schedule with DEF LEPPARD this year, 'cause LEPPARD have a new record coming up also, backed up by a world tour. So I literally don't have a lot of availability to do LAST IN LINE shows. And it would be a real shame — especially because the record is sounding so much better than we all anticipated — it would be a real shame to just put it out there and let it die. So we are talking with them about possibly trying to find whatever holes there may be in the DEF LEPPARD touring schedule this year to maybe see if it's worthwhile putting together a small run of dates for LAST IN LINE or some press stuff. And if not, we'll just kick it down the road until everyone's available to do it."