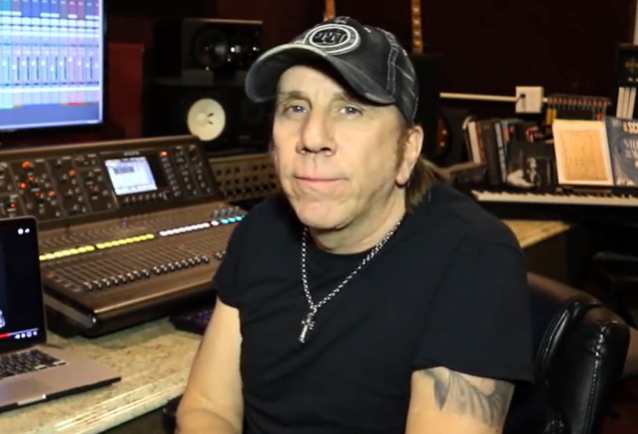 Troy Luccketta says that he doesn't know if he will ever play with TESLA again.

Last September, the 62-year-old drummer, who lives outside Nashville, Tennessee, announced that he would "take a little time from the road" to spend with family and friends. He is being replaced at TESLA's gigs by Steve Brown, the younger brother of former DOKKEN drummer Mick Brown.

Troy discussed his absence from TESLA's gigs during a new interview with Tulsa Music Stream. Asked if he is still taking a break from the band, he said (as transcribed by BLABBERMOUTH.NET): "I am. I'm on a bit of a break. Personally, there's a lot of things going on in my life that I'm… This thing that we do doesn't cater to families. So at the time that this had gone down and COVID and everything, it just really gave me some time to step back and kind of look at things.

"I'd been running hard with the band for 36 years," he continued. "And I love the guys and I love the band. I'm a fan and always will be. I've got nothing but praise for them. They gave me a great life and I think we all share in that.

"Right now I've been doing a lot of different projects," Troy revealed. "I never played in any cover bands, man, so I went out and played in a James Taylor tribute; I went out and did some with this LED ZEPPELIN tribute; I did a VAN HALEN thing with these friends of mine called COMPLETELY UNCHAINED. And then I'm in classic rock tribute. And those are some of the things. And records — I get to do a lot of records. I'm here. I like being home. And quite honestly, I just signed up… I'm doing some dates with THE GUESS WHO right now. I've done half a dozen shows… I'm having fun with the guys. I like the band; I like the guys. Yeah, good stuff — a lot of good stuff happening."

Luccketta was also full of praise for his replacement in TESLA, saying: "He's a great, great drummer, a great person, a great guy. And we're not best of friends or anything, but I've always known Steve over the years and I always knew he was the right choice. I had him pegged out years ago before I even had to make the phone call. So it's perfect. It's really great because, if you think about it, it's a win-win. And I think it's even a breath of fresh air probably for the guys right now. And it's like having a new girlfriend [laughs] for a minute."

Last month, TESLA guitarist Frank Hannon told Canada's The Metal Voice about Troy's absence from the band: "We're just allowing the time for things to work themselves out. He's got things that he's dealing with.

"Touring is not an easy life, man," he explained. "It's a very difficult thing being out there on a bus, with everybody crammed in that tight situation. And when you've got stuff going on at home, those things need to be taken care of. But hey, man, he's a long-standing member of the band.

Hannon went on to praise Steve's contributions to TESLA, saying: "Steve is not only 'Wild' Mick's little brother but he's also a member of our local community here in Sacramento. We've known him since he was a little guy. He used to come watch us play when he was a teenager. And he has done other shows for us in the past, filling in for Troy. So he's a member of our family as well."