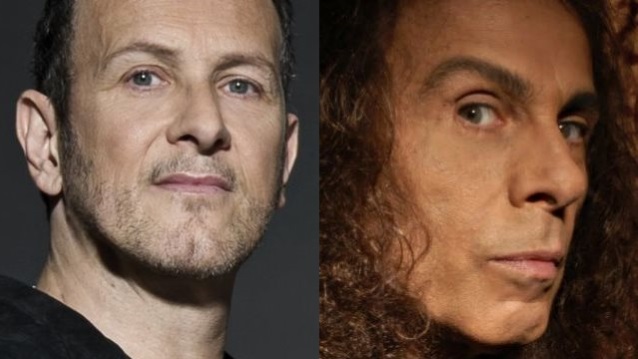 VIVIAN CAMPBELL: RONNIE JAMES DIO 'Would Be Very Approving Of What's Going On With LAST IN LINE'

The 55-year-old musician was honored at an event at the Mandela Hall in Belfast on Saturday, November 11 which ran alongside the NI Music Prize.

The presentation — which marked the end of this year's Sound of Belfast festival — was followed by a live performance from Vivian with LAST IN LINE, in which he is joined by fellow founding DIO member Vinny Appice, plus singer Andrew Freeman, who has previously fronted HURRICANE and LYNCH MOB and bassist Phil Soussan (OZZY OSBOURNE, BEGGARS & THIEVES, Steve Lukather).

In his acceptance speech, Campbell thanked a number of people who have helped him during his career, including legendary singer Ronnie James Dio, with whom Vivian parted ways with acrimoniously in 1986.

"Ronnie and I had our issues in life, but I assure you we have not in the afterlife," Vivian said (see video below). "And I know that Ronnie would be very approving of what's going on with LAST IN LINE and what's going on here tonight. So a shout-out to Ronnie."

Campbell recently said that was "saddened" that he and Ronnie James Dio "never had a chance to make it up" after their bitter split three decades ago.

Ronnie James Dio made headlines in 2007 when a clip of him surfaced calling Campbell "a fucking asshole" and "a piece of shit." Although Vivian has since expressed regret over referring to Dio as "one of the vilest people in the industry," the guitarist has consistently maintained that he was wronged by the now-deceased vocalist.