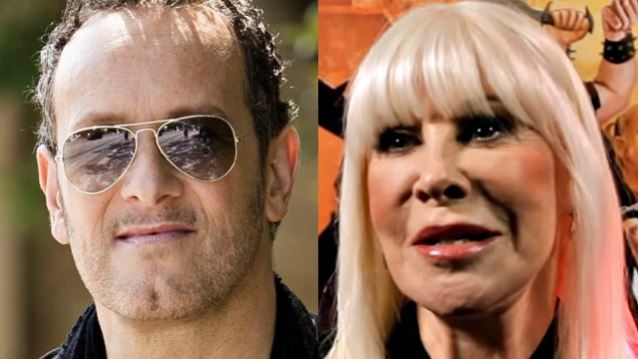 In a brand new interview with KNAC.com, former DIO and current DEF LEPPARD guitarist Vivian Campbell was asked if he and Ronnie James Dio ever got to mend fences prior to the singer's 2010 death. He responded: "No. I never got to talk to Ronnie again afterwards, unfortunately. Actually, we only talked to each other through the press, which is never, ever, ever a good idea. We were both guilty of saying really stupid and hurtful things. I'd like to think that we would have made up. I think if Ronnie and I had bumped into each other on the street, I think after a couple of minutes, we might have agreed to go to the pub for a pint and we could have probably worked things out."

He continued: "There was a part of Ronnie that was really, really warm and caring and giving. But there was also a part of him that could be very angry. Unfortunately, that was the part that I saw more than the other. The latter more than the former."

Vivian also addressed Ronnie's comment that he felt Campbell was totally wasting his time with LEPPARD. The guitarist said: "You know, if Ronnie thought I was wasting my time with LEPPARD, he should have just honored his commitment."

He went on to say: "Here's the thing. It wasn't about money. It was never about money. I am very, very big on principle. When a man looks me in the eye and shakes my hand and makes an agreement with me, I expect him to honor that agreement. Because I always uphold my end of the deal. And when I went to Ronnie, he reneged on that. The agreement was that by the third album, the band would be an equitable situation, and the reason I was fired was because I called him on that.

"The unfortunate truth is that Wendy Dio [Ronnie's wife and manager] never wanted DIO to be a band. She always wanted it to be about Ronnie, the solo artist. In her mind, it didn't matter who was in the band with Ronnie, who was standing behind him — bass player, guitar players, drummers, whatever; we were all interchangeable. I strongly disagree with that. I think every musician is unique, like our own fingerprint. The way you play, the way you don't play. The gaps you leave, the timing, the tonality you have, everything is unique to an individual, and when you find three or four people that work together and create a great sound, that's the chemistry of a band. That's unique. When you start pulling people out of that equation, it's never going to be the same. It's always going to be a facsimile."

Campbell added: "The original DIO band had a certain magic, not only in the way we sounded, but in the way created and we wrote those songs together. That was never going to be the same.

"I want to strongly emphasize, this was never about money. It was always about principle. That's what broke up the DIO band."

Campbell, along with drummer Vinny Appice and bassist Jimmy Bain, was part of the original DIO lineup, which reunited in 2012 alongside singer Andrew Freeman to form LAST IN LINE.

Campbell told Billboard magazine that Wendy has nothing to do with, and no love for, LAST IN LINE. "Vinny still has occasional contact with her," Campbell said, "and when we first started doing this project, she said something along the lines of, 'Ronnie would be spinning in his grave.' So there you go."

In a May 2011 interview with Brazil's Roadie Crew magazine, Wendy stated about the controversy surrounding Ronnie's relationship with Campbell (in a 2003 interview Vivian called Ronnie "an awful businessman and, way more importantly, one of the vilest people in the industry."),"[Vivian] always said that he hated all the albums that he played on with Ronnie, and that was very hurtful to Ronnie. Very hurtful. Would you like someone who said something like that about your albums? He said a lot of things in the press that I don't wanna get into, because it really wasn't Ronnie's feud at all. Ronnie didn't fire him. I fired [Vivian]. He wanted as much money as Ronnie wanted. He thought he was as important as Ronnie was, and that was just wrong. But I don't wanna get into that. It's water under the bridge. It doesn't matter."