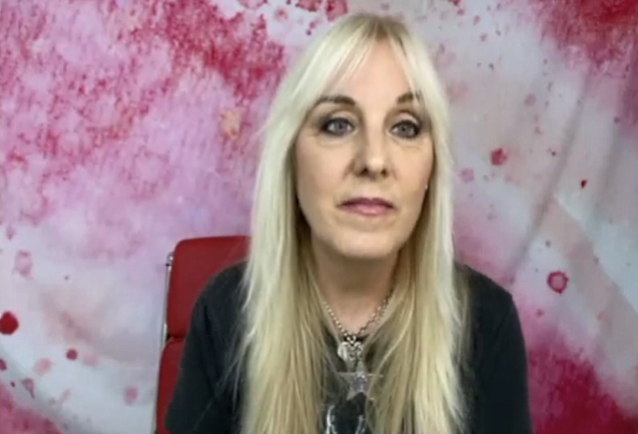 VIXEN Bassist 'Couldn't Breathe' For Three Days After Contracting COVID-19: 'I Stayed In Bed For A Month'

VIXEN bassist Share Ross spoke to Metal-Net about how she and her bandmates have been trying to stay creative during the coronavirus pandemic. She said (see video below): "It's been challenging during the quarantine, because we actually ended up in four different cities. So, it's pretty hard to get together with anybody. Britt [Lightning, a.k.a. Brittany Denaro; guitar] and I had done some stuff together, and then me, Britt and Roxy [Petrucci, drums] had done some stuff together in studios. And then we did a lot of stuff with the four of us, just getting into a room and just record all these crazy ideas that we come up with. So we've just tried to do a lot of different things. Even at soundchecks, we would just jam out ideas and stuff — 'Yeah, whatever. Record us. We don't care.'

"We really love spontaneity — when you're not trying to write a song," the musician, who lives in Boynton Beach, Florida, explained. "And there's something to be said for being in the room together.

"I would say that the whole COVID-19 thing, it made it a little bit challenging to feel creative for a lot of time. Initially, there was the, 'Oh my gosh. Oh my gosh. Oh my gosh. What's going on?' And then I actually had COVID-19, and Bam [Share's husband] had to nurse me back to health. I was down — I was totally down. I couldn't breathe for about three days, and then I stayed in bed for a month. So that happened. And then there was sort of a panic about, 'Oh my gosh. How are we gonna keep paying the bills?' So I think there was a scramble from everybody — everybody in our band.

"We don't all live off — there's not some massive VIXEN royalties or anything going out," Share added. "So it's really, like, 'Okay, I've gotta deal with my day-to-day. What are we gonna do?' So there was a little bit of panic for a while. Fortunately, that's lifted, and everybody's got things going on again now, so that's good.

"But, yeah, when you're panicking about eating, it's hard to feel creative, I think. So we didn't do a whole lot of back and forth — a little bit here and there, but not as much as I've seen other bands do. And I'm very impressed by that — I'm, like, 'Wow! That's amazing that they can do that.'

"Personally, I just do better when I'm in a room with somebody. That's just the thing for me. I like to feed off of the person — I really like that feeling."