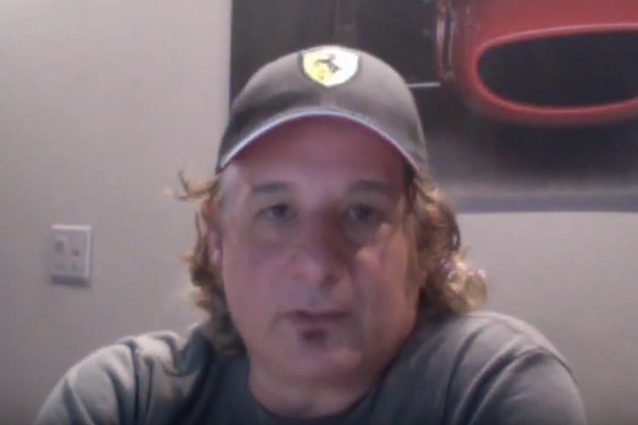 Will There Ever Be A WHITE LION Reunion? Former Drummer GREG D'ANGELO Weighs In

During a recent interview with Jason Green, former WHITE LION drummer Greg D'Angelo discussed the band's split and the possibility of a reunion.

D'Angelo and bassist James Lomenzo abruptly left WHITE LION at the end of a European tour in 1991 and were promptly replaced by Jimmy DeGrasso and Tommy "T-Bone" Caradonna, respectively, just a few months before WHITE LION broke up for good.

Asked about the chances of WHITE LION reuniting 30 years after the group played its final show, Greg said (see video below): "Especially after so much time has passed, I don't think anybody would really wanna do it unless everybody wanted to do it. And Vito [Bratta, guitar] is taking care of his family. I have a lot of respect for him for doing that. I spent a few hours with him a couple of years ago when I was in New York, and it was great to see him and great to catch up. I talk to him a few times a year, or e-mail him a few times a year, and he's doing okay. He's fulfilling his responsibilities, like a good Italian boy does, and taking care of his mom, and I have nothing but respect for him for that. He's complained to me a couple of times about having some pain when he plays that might contribute to his desire to do anything again. And I think he kind of appreciates what we did and he respects the memory of the band.

"At this point, unless Vito was on board to do it and Mike [Tramp, vocals] agreed to it, it doesn't really make much sense to kind of talk about it," he explained. "I don't think anybody needs to do it, to do some bastardized version of the band where it wasn't true to what it was — at least that's what I like to think, and that seems to be the case.

"Everybody's on good footing right now, I think, and I'm happy to be talking to Mike and Vito, and really just having pleasant memories of what we did together. We had a cool little club there for a while."

D'Angelo also reflected on the circumstances that led to WHITE LION's split, explaining: "We were young guys — we were really young guys — and we had a lot of stuff thrown at us all at once, and it was a lot to handle. Honestly, I don't think we got the best advice. And that's not to throw anybody under the bus. We kind of needed a little bit of guidance. We all came from working-class families, and we had never been exposed to this kind of world, and we really didn't have any idea of how to handle it.

"Everything I'm saying is a very, very typical story with a lot of different bands," he continued. "I don't think anybody really starts off super rich and goes and becomes a rock star. Maybe today there are a couple of famous people that are in that situation where they just bought it, which is more power to 'em, but it definitely wasn't us. We were working-class kids from the suburbs of New York, and I think if we had a little bit more depth, we could have maybe navigated our way around it. And it's unfortunate that it panned out the way it did.

"I'm very proud of the last record we made, and I think it was a foreshadowing of what could have come.'

Unlike many of his counterparts, Greg went on to say that he doesn't believe the rise of grunge in the early 1990s was responsible for forcing most hard rock bands off the radio and MTV, with album and tour sales plummeting.

"If everything is working out the right way, and everybody keeps their eye on the same prize, we could have got through the '90s," he said. "We could have played and done what we did and made enough money to keep us happy and living and content.

Tramp hasn't played with Bratta since WHITE LION performed its last concert in Boston in September 1991.

In the 29 years since WHITE LION broke up, Bratta's public profile has been virtually nonexistent, while Tramp has remained active, recording and touring as a solo artist and with the bands FREAK OF NATURE, THE ROCK 'N' ROLL CIRCUZ and, more recently, BAND OF BROTHERS. Tramp also attempted to revive WHITE LION with the 2008 album "Return Of The Pride", featuring new members. Two years later, Tramp ceded ownership of the name WHITE LION to Bratta in an out-of-court settlement.