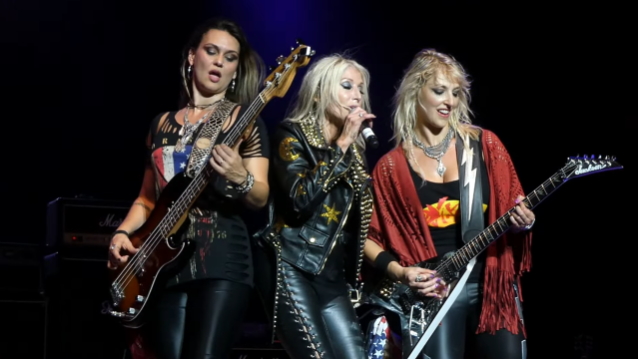 VIXEN To Release New Single 'In The Next Month Or So'; Music Video To Follow

In a new interview with the 97 Underground radio station conducted Tuesday (July 26) at the York State Fair in York, Pennsylvania, VIXEN drummer Roxy Petrucci said that the band's long-awaited new single will "be released soon — hopefully in the next month or so." She went on to say that she and her bandmates were "working on the video to follow."

Petrucci is the only remaining member of VIXEN's "classic" lineup. She is joined in the band by singer Lorraine Lewis, bassist Julia Lage and guitarist Britt Lightning (a.k.a. Brittany Denaro).

Last month, Lewis told SW Wall Interviews that she and her VIXEN bandmates were planning to release new music soon. "I want people to understand: this is not an album release yet," she said. "We've decided that we're releasing singles. So that's what our plan is. Will there be a VIXEN album eventually? Of course there will be. But we've decided instead of taking all the time to really do things right, which would mean all of us being together probably in the same place for quite a while, and it's not really conducive for all of us… Even though myself, Julia and Britt, we're all in California. But I'm in Palm Springs now. It's only a 45-minute flight. But Roxy is in Michigan. So for us to really do a full record would mean us being locked away for a couple of month all together, and I would love to do that, but we don't really have that luxury. So instead, we are releasing singles. So my guess is within the next two months — I don't think it's gonna be longer than that — we're going to be bringing you, everyone a new VIXEN single. It's Fred Coury [CINDERELLA drummer] that is producing. And, yeah, it's gonna be really, really fun, and I can't wait for people to hear it. I laid my lead vocals down about two months ago, and I'm really happy with it. And Fred was really happy. Fred was really great to work with."

Five months ago, Ross announced that she was "taking a hiatus" from VIXEN. Her replacement is Lage, formerly of the Latin Grammy-nominated Brazilian rock group BARRA DE SAIA and wife of Richie Kotzen. Lage made her live debut with VIXEN on February 8 at the pre-Monsters Of Rock cruise concert at Magic City Casino in Miami, Florida.

Last night's Vixen show at the York State Fair. The girls stopped over to say hi and do a quick interview with The Phantom. Thanks again ladies!