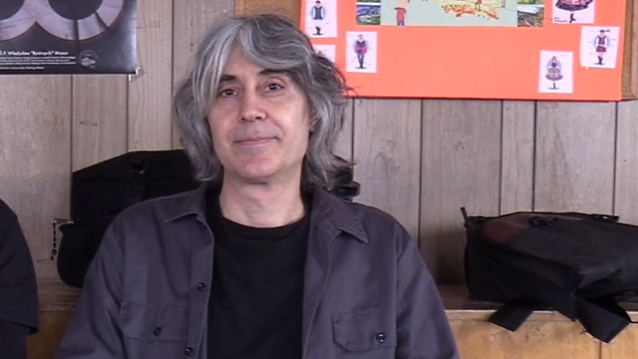 Alex Haber of Heavy New York conducted an interview with drummer Michel "Away" Langevin of progressive sci-fi metal innovators VOIVOD prior to the band's April 4 concert at Warsaw in Brooklyn, New York. You can watch the entire chat below. A few excerpts follow (transcribed by BLABBERMOUTH.NET).

On the touring cycle and reception for their latest studio album, "The Wake":

Michel: "It's very intricate, music-wise, and it's been received wonderfully, so it's a good indication that we can go down that prog-fusion-thrash metal path."

On whether VOIVOD takes a new approach with every new album or sticks with a specific formula:

Michel: "Well, we do have a few tricks in the sense we do a lot of improvisation at our studio. We record everything and pick the best parts. Chewy [Daniel Mongrain], our guitar player, rearranges these parts into VOIVOD-ian material, but quite often, Chewy will come with a full structure that will morph into VOIVOD material when we come in. Rocky [Dominic Laroche, bass] has a few riffs as well. So, it's basically the same way of working all the time, except that we've been touring so much the last few years that we had to find a way of working on the road, so we do demos on the laptop, either in the back of the bus or backstage. This way, we're hoping to have more releases and [do them] more quickly."

On whether he notices a different type of reaction from the audience depending on who they're playing with:

Michel: "Definitely. I mean, of course, if we go on a headline tour, we'll have our loyal following everywhere. Like on this tour or opening for bigger acts or co-headlining, we'll have a whole lot of people discovering VOIVOD because even though the name is out, not that many people know the music. We're still pretty underground. But, it's always fun to have new people discovering the band. It's really great."

On his playing approach as a drummer:

Michel: "I try to keep everybody into the song as much as I can. I do have a freestyle; I got it from 'Philthy' Animal Taylor [MOTÖRHEAD], where I don't necessarily make the same roll at the same spot every night, but I try to keep the structure intact so the guys don't get too lost. But I do have a freestyle and a bit of improv here and there and a lot of different dynamics. The songs from 'The Wake' are already different from this tour then they are on the album."

On what the Canadian metal scene was like in the 1980s when VOIVOD was getting their start:

Michel: "When we grew up, there were just a couple of bands coming. Not where we were born in Northern Quebec. These were EXCITER, ANVIL and CONEY HATCH. They had a very strong influence on us. Really when we released 'War And Pain', the doors opened for bands in Quebec to grow and follow the path we had cleared for them. Of course, now the Canadian and Quebec metal [scenes] is very respected. It's very technical and it probably comes from RUSH and Canadian bands like that. Just in Montreal, we have tons of friends that we crossed paths with across the globe: CRYPTOPSY and GORGUTS and KATAKLYSM. There are tons of bands like that. ANNIHILATOR from the West Coast — maybe they moved to the East Coast, I don't know where Jeff [Waters] is. Devin [Townsend]; super-talented guy. There are tons of heavy stuff coming out of Canada."

"The Wake" was released last September via Century Media Records. The disc was recorded and mixed by Francis Perron at RadicArt Recording Studio in Canada. The album's artwork was once again created by Langevin.