Canadian metal innovators VOIVOD have set "Target Earth" as the title of their new album, to be released before the end of the year.

VOIVOD drummer Michel "Away" Langevin has unveiled the band's new logo which will be used on the upcoming CD. Check it out below.

Several photos from the recording sessions can be found on the band's Facebook page.

According to a posting on the page, fans can "expect something in the vein of 'Nothingface' with some elements from the other albums. It will be a classic VOIVOD album."

Regarding what the new VOIVOD songs sound like, Mongrain said in a recent interview, "As a VOIVOD fan since I am 12 years old and early rise of VOIVOD in late '80s and everything, I think… I'm in conflict of interest right now. [Laughs] I like the old stuff as much as the new stuff, so I think it's a blend of everything. It's really a team work and Blacky [Jean-Yves Thériault] is back on the 'blower bass' — he's got the original sound — and we're having a blast jamming, improvising and writing. I think it's working pretty good."

On the topic of the lyrical themes covered in the new VOIVOD tracks, singer Denis "Snake" Bélanger said, "The song we played [on the recent European tour] ['Kaleidos'] is about conspiracy involving drugs and the FBI… [Laughs] It's hard to describe because we're kind of early in the process. There's another song called 'Target Earth', which is more like a spacy, conspiracy, controlling the information around the world. The main thing is the 'war' of information. You know, somebody Osama Bin Laden is dead, someone [else] says he's not… It gets to a point where everybody has his own story and nobody is sure what the truth is. There's people above everything controlling the information."

In an interview with Exclaim.ca, Away stated about VOIVOD's forthcoming studio album, "It's more in the progressive metal vein, so it's reminiscent of the 'Dimension Hatröss' era."

VOIVOD debuted the "Target Earth" title track during their April 12 concert at the Roadburn festival at the 013 venue in Tilburg, Holland. You can watch fan-filmed video footage of their performance below. 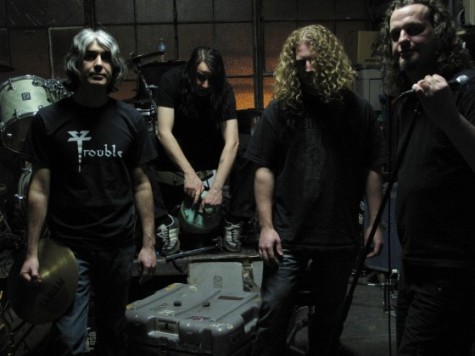