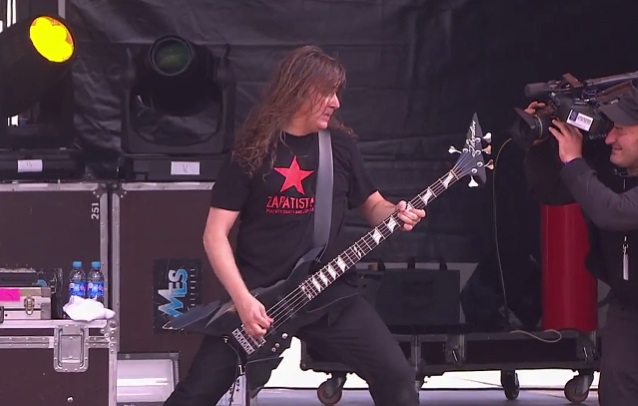 **UPDATE**: VOIVOD has released the following statement regarding bassist Blacky's latest departure from the group:

"It saddens us to announce that VOIVOD will no longer be performing live with Blacky. Jean-Yves has decided to leave the band for his own personal reasons. We wish him all the best. VOIVOD will carry on."

Blacky has confirmed that he will not perform with VOIVOD at the band's next live appearance, which is scheduled for this Saturday, July 12 at Festival Jonquière En Musique in Jonquière, Quebec, Canada.

Blacky originally left VOIVOD in 1991 for personal reasons, and went on to co-found The Holy Body Tattoo Dance Society, a now-defunct award-winning Canadian contemporary dance company, which existed from 1992 to 1999. He composed, produced and engineered the scores for "White Riot", "L'Orage", "Poetry & Apocalypse", and "Our Brief Eternity".

In a 2003 interview Metal Update, VOIVOD drummer Michel Langevin (a.k.a. Away) vowed that Blacky would never rejoin the band, explaining: "Unfortunately, we don't really get along with Blacky. He is the one who will never be back in the fold. I know that it would please the hardcore fans and everything, but it just won't happen. The circumstances of his departure were really hurtful. It has a lot to do with childhood friendship and broken trust. I don't think we can patch it up, actually. It's too bad. It really got to the bottom of the barrel with the 'Angel Rat' recordings. We were not too sure about the final result of the album, but our approach was just, 'Okay, let's keep going and next time we'll do better,' you know? But it didn't happen like that with Blacky, and the way he left the band was really, really awful. But it's something that we never discuss in the press and it's an obscure part of the VOIVOD story. It's just that the breakup was so sour."