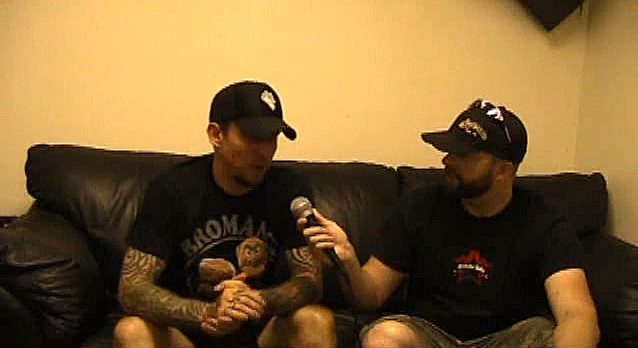 VOLBEAT Frontman: How I Lost 40 Pounds

Shawn of Rockstar Radio conducted an interview with Michael Poulsen of Danish/American metal rock 'n' rollers VOLBEAT before the band's September 14 performance at Operation Kick Ass in Chula Vista, California. You can now watch the chat below.

"It's a new vibe for VOLBEAT," said Poulsen. "You've got everything — the rockabilly stuff, the melodies, the ultra-heavy stuff, the Western motifs and the big rock songs. It's everything that VOLBEAT are all about, but taken even further."

The "Outlaw Gentlemen & Shady Ladies" album title is a phrase that evokes another time, an era when elegant lawbreakers were the rock stars of the day. It tips its fedora to everything from the bad men (and women) of the old west to the old-school metal bands who influenced the young Michael Poulsen to form his first band, DOMINUS, back in the early 90s.