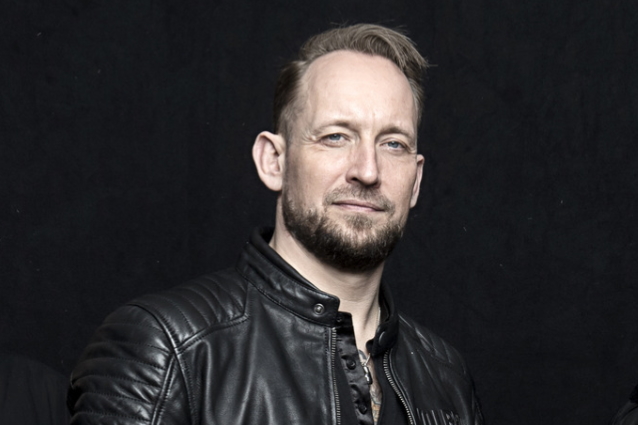 VOLBEAT Frontman On Coronavirus Crisis: 'Hopefully Mankind Can Learn A Thing Or Two About Treating The Whole World The Right Way'

VOLBEAT's Michael Poulsen spoke to Meltdown of Detroit's WRIF radio station about how he is dealing with the coronavirus pandemic, which has infected more than two and a half million people globally. The Danish singer said: "The whole world is a little bit weird and crazy these days. But I'm just happy that my family and friends and people around me are doing good. So, yeah, I don't have anything to complain about, even though times are getting tough and weird. But hopefully mankind can learn a thing or two about treating the whole world the right way."

Asked what advice he would like to give to VOLBEAT fans about dealing with life during the coronavirus crisis, Michael said: "I can't really say anything else that hasn't been said, because we basically just have to do what we have been told, and that is to be patient, treat people around you nice and have distance, wash your hands and stay healthy. Listen to what the government and the whole society is telling you, because that's the right thing to do. Even though everybody wanna go out and do what we're supposed to do, we still have to be careful and take good care of each other, because if we don't, there's no chance that we can go out and do what we're supposed to do."

According to official figures, 7,515 people have tested positive for the new coronavirus in Denmark and 364 people have died.

Denmark was one of the first European countries to announce a lockdown and is now among the first slowly relaxing it.

Earlier this week, Denmark took the next step to end its coronavirus shutdown, allowing such businesses as salons, tattoo parlors, beauticians, dentists and opticians to reopen.

On Monday, VOLBEAT revived its long-running "Official Bootleg" series with the release of a live video for "Leviathan". The track is the latest single off the band's seventh studio album, "Rewind, Replay, Rebound". The clip was recorded last year at the Barclaycard Arena in Hamburg, Germany.

VOLBEAT announced in March that it was rescheduling its spring U.S. tour, which was due to start earlier this month, to September and October. Dates and details are still being finalized.