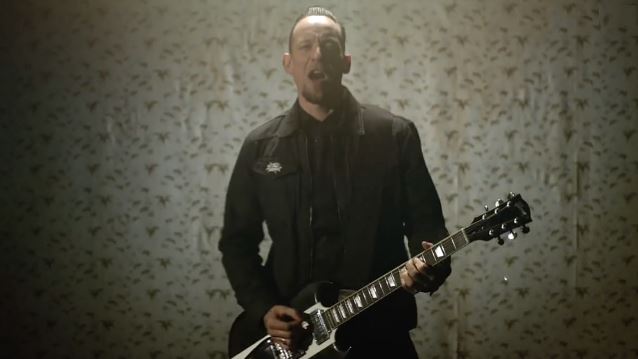 VOLBEAT singer and guitarist Michael Poulsen told ARTISTdirect in a new interview that he has already started writing material for the Danish/American group's sixth studio album, to be released by the end of 2015. Poulsen said, "I'm actually working on new songs right now. We try out new things in the soundchecks during [our current North American co-headlining] tour [with FIVE FINGER DEATH PUNCH]. We can already play a few new songs. I just need to put work into them. I have snippets for at least three other songs. When I get home, I'll start to put all of the pieces together. We'll probably try them out again next tour. I'm in the writing process now."

Asked about the musical direction of VOLBEAT's new material, Poulsen said: "When it comes to VOLBEAT, it's always all over the place, because I like it all. That's why I formed VOLBEAT. There are so many styles in VOLBEAT, and it's always going to sound like VOLBEAT. We're not trying to change anything. We're trying to progress but without changing too much. I already know how I like to write and how I like my songs to be. At the same time, we always try to come up with things we haven't done before because that's the beauty of inspiration. You can always find things you think are cool. On the next record, you'll have all of those different styles."

VOLBEAT lead guitarist Rob Caggiano told Soundcrave magazine that the band will start recording its new CD by next summer. Caggiano said, "We have been floating around some ideas. We will probably go back to the studio next year, maybe in August. We have some much-needed down (time) coming up. We finish this album cycle in November in the U.K., then obviously the holidays and some family time. Next year, we will start getting into creative mode and start doing some stuff."

Caggiano told The Pulse Of Radio that while the band has worked up some new material on tour, it's hard to concentrate on writing new music while on the road. "We've been flirting around with some riffs on the road, we've been actually trying some different things live, actually — it's been going great — but yeah, you know, right now we're very much focused on touring," he said. "It's a very full-on schedule and for me to be creative I've got to be in a certain headspace. But you know, of course, I do have riffs stashed away."