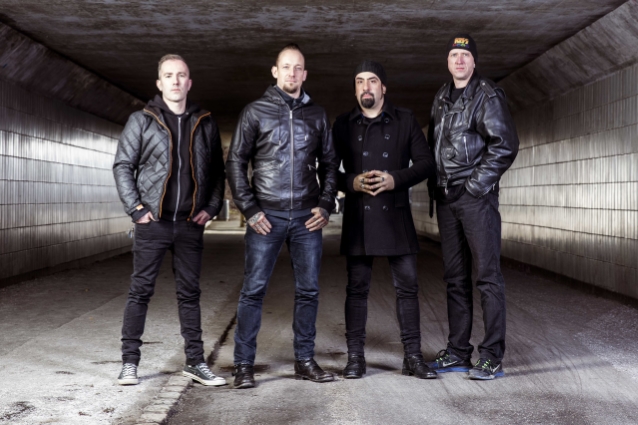 In a recent interview with Italy's SpazioRock, guitarist Rob Caggiano of Danish/American rock 'n' rollers VOLBEAT spoke about the band's plans to work on the follow-up to 2016's "Seal The Deal & Let's Boogie" album. "We're still writing and rehearsing new ideas," he said (see video below). "We've been doing that for a little while now, but after this [summer European] tour, we're gonna get back to Copenhagen and really start drilling stuff and probably doing a bunch of demos of some new songs.

"The plan, I think, is to go in the studio end of November, see how far we get, and then we're gonna take a break for the holidays, and then reconvene, I guess, in February and do the second half — just finish up anything that needs to be finished," he continued. "Yeah, definitely there'll be a new VOLBEAT record next year."

As for a possible musical direction for VOLBEAT's next record, Caggiano said: "No two VOLBEAT records are really like — they don't really sound alike — at least the two that I've been involved in. And the new stuff we're working on, it's probably gonna be… It's too early to say, but it's gonna be a different feel than the last record. It doesn't make sense to repeat yourself as a band. It's, I think, healthy to keep pushing yourself and growing, trying new stuff, new directions."

Asked if VOLBEAT has been doing any writing on the road, Rob said: "Yeah, absolutely — every chance we get. Unfortunately, this tour is a lot of festivals, so we don't really get soundcheck, but when it's our own headline show — like the other night, we played in Austria and we did a long soundcheck and started going over some new ideas. We try to do that, obviously, as much as possible, but this tour, for us, is, for the most part, a lot of festivals. There's a few headline shows here and there, but it's mostly festivals. We don't get a soundcheck for the festivals."