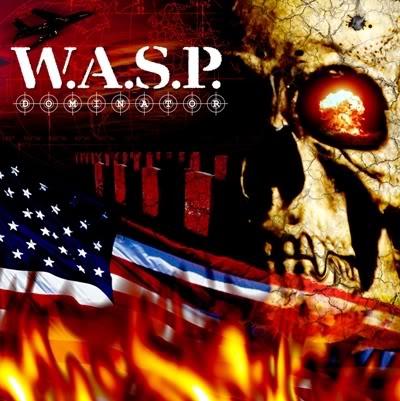 W.A.S.P. mainman Blackie Lawless has taken the opportunity to explain the story behind the song "Heaven's Hung In Black", which appears on the group's new album, "Dominator", due out in the U.K. on April 16, Scandinavia on April 20, and the rest of mainland Europe on April 27 via Demolition Records. The CD will arrive in South America and Russia in early May.

Commented Blackie: "The title is from a quote from American President Abraham Lincoln when he saw the casualty reports from the battle of Gettysburg, and after reading that he said, 'Tonight the Heaven's are hung in black.' So I took that idea and I wrote it from a point of view of a U.S. soldier in Iraq who's on the verge of dying and he's standing at the Gates of Heaven but St. Peter tells him that because of all the fighting that has been taking place, they have no more room in Heaven, and that he must come back some other time. So based on that understand that the verses are St. Peter talking, and the chorus is the soldier."

Check out an audio clip of the song at this location.

Listen to more audio samples from "Dominator" at this location.

A video clip of W.A.S.P. performing the new song "Mercy" on September 6, 2006 at Kaliakra Stadium, Kavarna, Bulgaria has been posted online at YouTube.com. Several video clips of W.A.S.P. performing live in Athens, Greece on October 13, 2006 have been posted online at the W.A.S.P. MySpace group page at this location. A fall 2006 Finnish TV interview with W.A.S.P. mainman Blackie Lawless is available at YouTube.com.