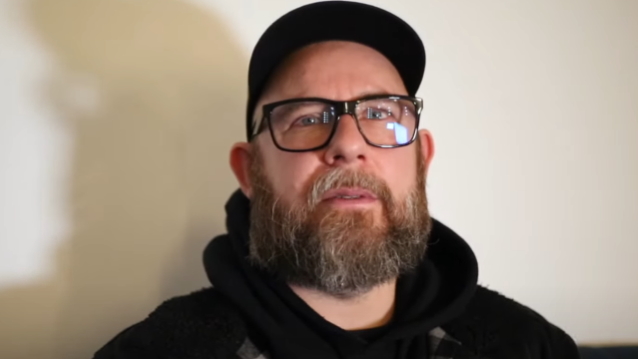 Anders Fridén, frontman of Swedish melodic death metal band IN FLAMES, recently spoke to France's Loud TV about how the state of the world has changed more than two years into the coronavirus pandemic. He said (as transcribed by BLABBERMOUTH.NET): "It is a scary place we live in. What I was hoping, after the pandemic, the pause that we all had, that we would come out and be nicer and show more respect and love, between people, between nations and stuff like that, but it seems like it's more hostile than ever. And now we have a war here [in Europe] that's going on for a while. I don't understand the way we treat each other. And the language that's happening online, with social media and stuff. We're pointing fingers left and right. There's not a debate even anymore. If I don't agree with you, then I hate you, which is just so weird. I'm, like, what is that? There's no 'agree to disagree' anymore — it's just full of anger, and, like I said, pointed fingers. And 'you're wrong' and 'you're wrong' and a bunch of fucking opinions left and right. And we treat opinions like they're facts, which they are not."

Last month, Fridén spoke to Czech Republic's Metalshop TV about the criticism he and his IN FLAMES bandmates have faced for their musical evolution, which has seen them adopting a more alternative metal sound after starting out as melodic death metal act

"I've been in this band since late '95," he said. "My first album was 'Jester Race'. When we released 'Whoracle', there were people saying, 'It doesn't sound like 'The Jester Race'.' And then when did 'Colony', and people said, 'It doesn't sound like 'Whoracle'.' And then we did 'Clayman' and people said, 'It doesn't sound like…' So it's been like that all the time. And I'm happy that we can release albums that are challenging to people, that they don't know where to put it, but in time it will be a classic IN FLAMES album. And I think this new one is gonna surprise people, but in 10 years' time they're gonna say it's their favorite. So it changes.