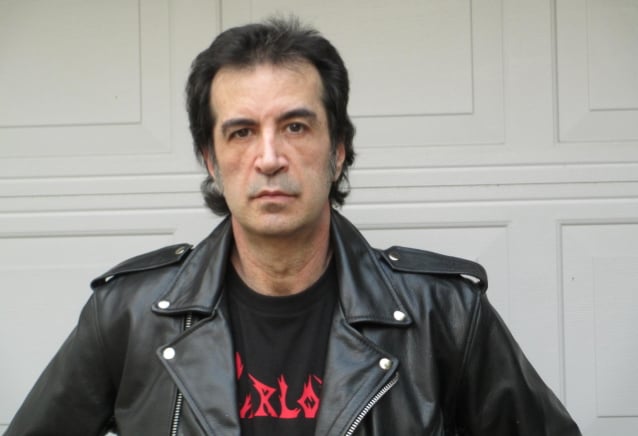 According to the WARLORD fan club, the band's co-founder and guitarist William J. Tsamis passed away on Thursday, May 13 at the age of 60. No cause of death has been revealed.

In a 2017 interview, Tsamis revealed that he was suffering from a serious health issue which he said would "never go away" but he offered no specifics.

Founded in 1980 by Tsamis and drummer/percussionist Mark Zonder, WARLORD is considered a pioneer in power metal thanks to its now-classic 1983 six-song EP, "Deliver Us". Kerrang!, Sounds, Burrn! and Music Connection all featured the band and praised the release thanks to their outside the norm, semi-progressive style that was inspired by such diverse acts as RAINBOW, SCORPIONS and JETHRO TULL. Adding further intrigue to the WARLORD mystique was the band members' use of pseudonyms such as Destroyer (Tsamis),Thunderchild (Zonder),Damien King (vocalist Jack Rucker) and Sentinel (keyboardist Diane Kornarens). The band also refused to become just another L.A. club act and opted to present themselves on a grander scale. They famously rented The Raymond Theater out to stage what would turn out to be the only WARLORD live performance in the USA, prior to August 2013. It was filmed and recorded for the group's first full-length release, "And The Cannons Of Destruction Have Begun..." , issued in October 1984, accompanied by a home video release of the same name.

While the band disbanded in 1986, they amassed a cult-like following in Europe despite their inactivity. This was largely due to rave reviews in metal the press, continuous airplay, and the circulation of many demos via "tape trading," as well as positive word-of-mouth promotion among metal fans. With the onset of the Internet, the music of WARLORD spread worldwide and thus helped secure WARLORD a place in the history of heavy metal as one of the great metal forefathers of the ‘80s.

After the band dissolved, Zonder joined prog metal pioneers FATES WARNING and went on to release numerous albums with them as well as others thanks to his skills then and now being in high demand. It was during one of FATES WARNING's European tours that Zonder realized that WARLORD's following had grown considerably with multiple fans asking him to sign WARLORD albums and demanding new music from the band. Zonder contacted Tsamis and, as soon as schedules permitted, WARLORD was once again an active band. Vocal duties were assigned to HAMMERFALL vocalist (and massive WARLORD fan) Joacim Cans. Thus, in 2002, a new album, "Rising Out Of The Ashes", was recorded and released worldwide to rave reviews. This was followed by the first ever WARLORD live performance in Europe at the prestigious Wacken Open Air festival in Germany.

A string of mishaps and serious family health issues plagued WARLORD after these performances and the band was once again put on a hiatus, which lasted for almost nine years. WARLORD returned to active status formally in March 2012. Vocal duties would be handled by one of the original '80s WARLORD singers, Rick Anderson, and Philip Bynoe (Steve Vai, RING OF FIRE) joined the band on bass. That lineup released "The Holy Empire" to much critical and fan acclaim. In the meantime, mounting pressure by promoters and fans bore fruit and WARLORD announced that they would headline the April 2013 German Keep It True XVI festival. This announcement was followed by two headlining dates in Greece — Thessaloniki and Athens — which sold out, thus leading to a second headlining show in Athens which sold out as well.