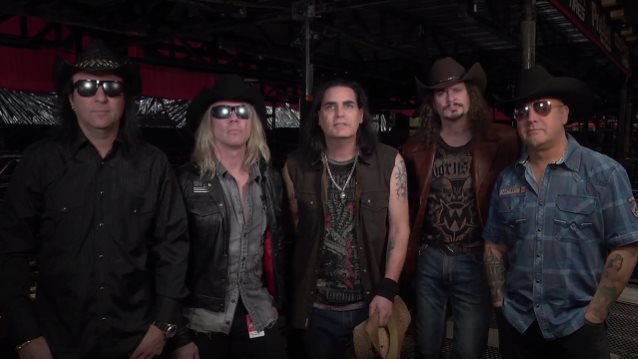 In a brand new interview with EonMusic, WARRANT bassist Jerry Dixon spoke about the 2011 passing of the band's original singer, Jani Lane. "Honestly, it was horrible," he said. "The whole thing still gives me a stomach ache. I try to tell people it's not about WARRANT; we're just people. We're no different to anybody else, and to have a family member suffering like that — and there's loads of people that are going to read this, and they'll know what I'm talking about — and it's a hopeless feeling, because you want to help, and you want to get somebody better, and you want all bad stuff aside. 'Dude, just function in life, and get through this, and basically don't kill yourself.' We brought sober coaches out and set up AA meetings and took all the fun stuff off the rider — all the alcohol — and really tied to create an environment that was conducive to somebody's being sober."

Asked if he noticed a change in Jani's behavior when the singer rejoined WARRANT in 2008, Jerry said: "Well, the best way to describe it is it was a long, painful death, one drink at a time. He had tried. There was periods before that, he was sober for a while and we had to keep him busy, so he was our tour manager. We went to Hawaii and he collected the money, and you know, it kept him busy. He fuckin' fought, and he did the best he could."

Dixon added that he was glad Jani returned to WARRANT one last time three years before his death. "Yeah, because he wasn't in the band four years before he came back," he said. "We did a record called 'Born Again' with Jaime St. James [on vocals], and we were rolling pretty good, and we were just going to accept the fact that we gotta rebuild the band with a new singer. There was a lot of loose ends that came when he left in 2002; the business, and just a lot of mess we had to clean up. So it was great that when he did come back, that was the first thing we said: 'Look, dude, let's clean up all the business shit. Let's be friends, let's settle all this shit we got going on, and then we'll make some music.' So that part of it was nice for him and for us, to finally clean up the mess of the last decade. And it gave us that feeling of, you know what? We really did try. We gave people what they wanted; it was the five original guys. It just came at the end of the day, he was just in bad shape, and it just wasn't working, and being on the road's the last place we felt he should be."

Lane recorded several albums with WARRANT in late 1980s and early 1990s but left the group several times. The band replaced him with Robert Mason and released its latest studio album, "Louder Harder Faster", in May.