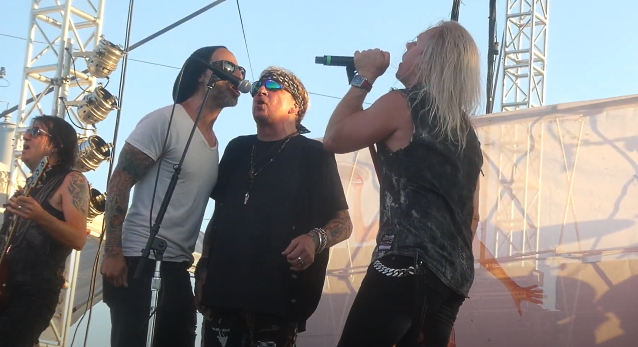 Back in 2010, former WARRANT vocalist Jani Lane filled in for Russell at a number of GREAT WHITE shows while Jack was recovering from major surgery after suffering a perforated bowel (a medical emergency in which a hole in the bowel opens to allow its contents to empty into the rest of the abdominal cavity).

"I've been friends with Jack for decades," Lane told Syracuse.com at the time. "We've always had a good relationship. And I've known all the [GREAT WHITE] guys for awhile."

Lane said that he didn't immediately accept the invitation to fill in while Russell recovered from a perforated bowel. "I had to talk to Jack first," Jani explained. "I've been on the other end of this, where I was the last to know who was going to replace me and sing the songs I wrote, which is a very uncomfortable place to be in."

Lane spoke to Russell while Jack was still in the hospital. "He was great," Jani said. "He said, 'Go do it. Keep the fire alive.' I said, 'Get back on your feet, and the second you're back, I'm gone and you kick ass.'"