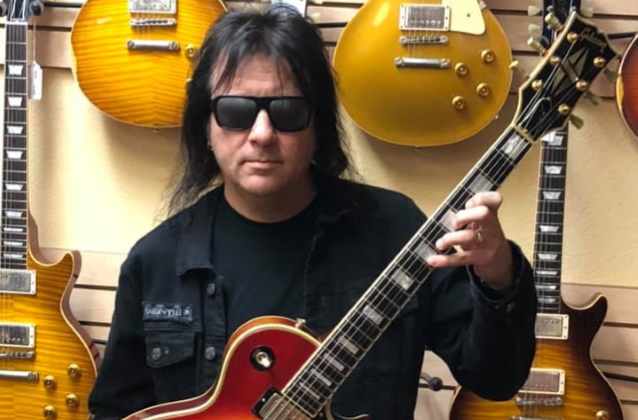 WARRANT guitarist Erik Turner has confirmed to "The Chuck Shute Podcast" in a new interview that he nearly auditioned for MEGADETH when the Dave Mustaine-fronted outfit was first being assembled back in 1983. "Yeah, it's true," Erik said (see video below). "When I was 16, there was a paper called the Recycler in Orange County, and there was an ad in there. I had never heard of METALLICA at the time, but [the ad said], 'Ex-METALLICA guitarist forming new band MEGADETH. Inquire if you're interested.' So I contacted Dave through the paper, the phone or whatever. And I went down. I think it was Huntington Beach, and it was his mom's apartment or something there that he was staying at. I don't know whose [place it was]; I think it was his mom. I don't know. I could be wrong. But anyways, I met Dave. We talked. And that was it. I never got past that audition to the next level of actually jamming with Dave. But years later, we lived in the same apartment building in Sherman Oaks — Dave and I — and I would see him at different places and say 'Hi.' And I reminded him of that story. And yeah, he's always been super cool to me."

Mustaine and bassist David Ellefson formed MEGADETH 37 years ago, after Mustaine got kicked out of METALLICA. METALLICA recruited Kirk Hammett and went on to record its debut album, "Kill 'Em All", later that year, while Ellefson and Mustaine began work on MEGADETH's first LP, "Killing Is My Business... And Business Is Good!"

In a 2017 interview with "The Jasta Show", Mustaine said that there are really just three MEGADETH guitarists whom "fans identify with."

"When I first hired Jeff Young [in 1987] to replace Chris Poland, did I think that Jeff could replace Chris? No," he said. "Did I think that Jeff was good enough player to be in MEGADETH? Yes. The last time that I heard anything that he had done — still a terrific guitar player. But you compare Marty [Friedman] and Kiko [Loureiro]... There really are only three guitar players the fans identify with: Chris Poland, Marty Friedman and Kiko. That's it. I personally liked Glen Drover [played in MEGADETH between 2004 and 2008] a lot, I thought that he was really cool. The other guys, they all were the part of the alumni and I love and respect everything that they did for us."

In April 2017, Mustaine ranked his favorite MEGADETH guitarists in descending order, with the last one being his least favorite. The MEGADETH leader's list — which he tweeted — did not include the band original second guitarist Greg Handevidt — who was in the band only in 1983 — nor SLAYER's Kerry King, who was only in MEGADETH as a touring guitarist for several gigs in 1984, but it did include Mike Albert, who toured with the group as a temporary replacement for Chris Poland in 1985.

Was in the band as a touring member only, having temporarily replaced Chris Poland on a 1985 tour. He does not appear on any of the MEGADETH albums.

A short time after Loureiro joined MEGADETH, Mustaine praised the Brazilian musician, calling him "definitely the best guitarist we've ever had."

Mustaine's comments echoed those he made about Broderick during the latter's tenure in the band. In a March 2013 tweet posted during the making of MEGADETH's "Super Collider" album, Mustaine wrote: "Chris has finished 'Super Collider' ... All I can say is he is without a doubt the best guitarist I've ever played with."

In a 2015 interview with Rolling Stone, Mustaine defended his comments, saying: "You know, that's something that has been kind of a go-to statement for me whenever I get a new player. I usually say, 'Oh, they're great, they're great,' right? Because of the enthusiasm and stuff. It's like, you get a new car, you have that new-car smell. But there's a difference between a guy that has talent, and a guy that has talent and personality, or a guy that has talent, personality and a sense of humor. And, you know, I wasn't really close to Chris [Broderick]. Going from Chris to Kiko, we have a bond right now where we laugh and we joke and we do stuff together."

Back in 2009, Mustaine praised Broderick, saying in an online post: "I am going on record and I am saying unequivocally that Chris is THE BEST GUITARIST MEGADETH has ever had. And the real talented musicians in MEGADETH's alumni will agree, he is an absolute monster. I mean, he plays the catalog better than anyone did. Jeff Young never wanted to do Chris Poland's stuff, and so on, and so on, until the last guitarist we had before we disbanded over my arm injury."

Mustaine added: "It's funny, because just when I think [Broderick] can get no more outrageous, or any more thrilling with the guitar solos, he comes up with something really beautiful like Marty Friedman would do (he has Marty pretty well down pat),and then goes into the GIT styles that Jeff Young did, yet, there is still such a freshness to his playing and he is so raw, it's like having a new prize bull. And even though he ain't a such a young bull, he's definitely an old bull like me."

WARRANT's latest album, "Louder Harder Faster", was released in May 2017.