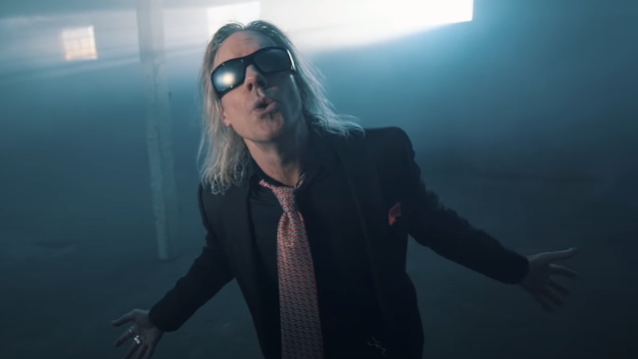 Robert Mason says that he is "thankful" he has been embraced by WARRANT fans after Jani Lane's final exit from the band.

Asked in a new interview with Anne Erickson of Audio Ink Radio how he goes about doing the classic WARRANT material justice, Mason responded (hear audio below): "It's not up to me. How do I do it justice? That's up to everybody else. Opinions vary. I'm just thankful that fans embraced me coming into this band when Lane no longer could. And he even made his peace with it. He and I were really good friends. When we were making a LYNCH MOB record in '91 and '92, and they [WARRANT] were making 'Dog Eat Dog', we got to be friends, and that was the reason why my band ended up supporting his band. I just do those songs the best justice I possibly can, and I truly do enjoy my job. I was a fan first, so that probably helps. I was a fan and a friend, so I wanna see that legacy continue. People wanna see it. As long as people wanna see it, we'll keep doing it — as soon as we're allowed to. [Laughs]"

Mason also talked about the 30th anniversary of WARRANT's "Cherry Pie" album and the enduring appeal of the LP's title track, which became a Top 10 hit on the Billboard Hot 100 chart.

"It's big power chords. It's simple melody and lyrics. And, you know, c'mon, it's about sex," he explained. "That's what rock 'n' roll is slang for anyway. It's how it all started. It's one of those songs that just ended up connecting with so many people. And it was the time, too. You have to remember, that was 30 years ago. Look at what the world was like. Look at what communication was like. Look at what MTV was like. That generation that really latched on to that all that late-'80s, early-'90s music, maybe it was the last real good gasp of what people call hair metal or L.A. or Sunset Strip — all those silly words that everybody likes to label you with. It was kind of nearing to the end of that before it sort of imploded upon itself. I think it was an amazing time. Those songs are about good times and happy and celebration and all of that rather than moody, depressing, introspective, 'world is awful,' wah, stare at my shoes. You know what I mean? I'm not one of those performers; I never was, no matter what the subject matter. And all that stuff was still going on then. And if you lived through it the first time, with the way the world is, maybe it makes you, at times, nostalgic for that sort of feeling. And I think that's the majority of the connection. I can get everybody in the crowd to sing along to that one — or at least I think I can."

WARRANT's latest album, "Louder Harder Faster", was released in May 2017. The disc was recorded with producer Jeff Pilson — a veteran bassist who has played with DIO, FOREIGNER, DOKKEN and T&N, among others — and was mixed by Pat Regan, except for the song "I Think I'll Just Stay Here And Drink", which was mixed by Chris "The Wizard" Collier (FLOTSAM AND JETSAM, PRONG, LAST IN LINE).