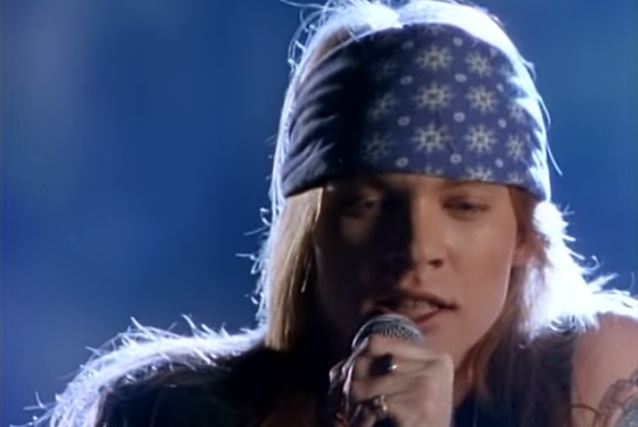 Australian blog MAX TV has pointed out similarities between the GUNS N' ROSES classic song "Sweet Child O' Mine" and "Unpublished Critics", a song by the Australian band AUSTRALIAN CRAWL.

"Unpublished Critics", which was released in 1981 — six years before "Sweet Child O' Mine" — contains "the same chugging chord progression, a similarly-sweeping lead break, the verse melody, and the elongated one-syllable vocal in the chorus," according to the site.

James Reyne, a member of AUSTRALIAN CRAWL, says that he has no intentions of taking GUNS N' ROSES to court over the matter.

But he added: "I'm not about to take on the might of the GUNS N' ROSES lawyers."

Former GUNS N' ROSES guitarist Slash told a Cincinnati radio station last year that he wasn't a fan at first of "Sweet Child O' Mine". He explained, "I didn't hate it, but I wasn't fond of 'Sweet Child O' Mine'. And that gives you a good idea of how credible my opinion is. The actual riff itself I love, but the song itself…"

Slash added: "GUNS N' ROSES was always a real hardcore sort of AC/DC kind of hard rock band with a lot of attitude. If we did any kind of ballads, it was bluesy. This was an uptempo ballad. That's one of the gayest things you can write… It's a great song — I'm not knocking it — but at the same time, it just did not fit in with the rest of our, sort of, schtick. And, of course, it would be the biggest hit we ever had."

"Sweet Child O' Mine" eventually hit No. 1 on the Billboard singles chart and helped propel "Appetite For Destruction" to sales of millions of copies.

In addition to being the biggest hit from that album, "Sweet Child O' Mine" has been covered by artists ranging from Sheryl Crow to Luna.

Slash was asked in a U.K. interview to name the most lucrative song he ever wrote. He replied, "I'd guess 'Sweet Child O' Mine', because it's the most covered."