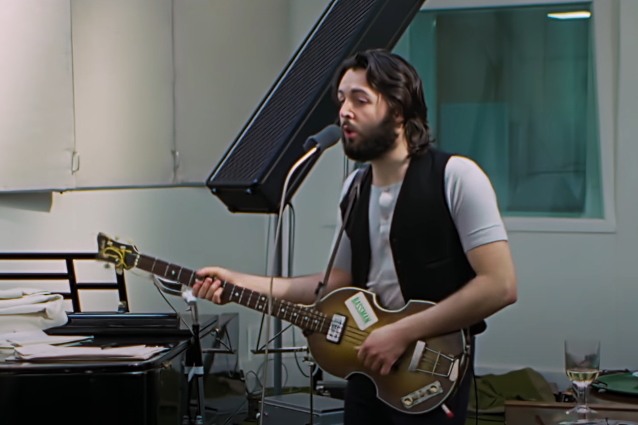 Was THE BEATLES' 'Helter Skelter' The First Heavy Metal Song Ever Recorded?

Switzerland's industrial black metal force SAMAEL has released the official music video for its cover version of THE BEATLES' "Helter Skelter". On the occasion of the 53rd anniversary of the release of "Helter Skelter", SAMAEL celebrates the legacy of the band and the birth of heavy metal. The song originally appeared on SAMAEL's latest album, "Hegemony".

On "Helter Skelter", the industrial formation travels way back to the end of the 1960s, examining the dark sides of technology and spirituality, including numerous references to the song’s original time frame. With whispering screams, metallic drums, shredding guitar play and targeted string inserts, SAMAEL creates a majestic yet intimidating, cuttingly clear soundscape that presents the legendary THE BEATLES composition in a whole new light while still staying true to its roots.

SAMAEL commets on "Helter Skelter": "To the question 'what is the first metal song ever recorded,' we've decided to answer 'Helter Skelter' from THE BEATLES! To commemorate the 53rd anniversary of the first release of 'Helter Skelter' and consequently the birth of heavy metal, we present you with a video of our own version of the song. The video exposes the dark side of technology and spirituality with numerous references to the time frame in which the song was originally released. Musicwise, we've tried to stay true to the original version of the track but we've approached it like it is our own composition. The song appears on our latest album, 'Hegemony'."

The original version of "Helter Skelter" appeared on THE BEATLES' 1968 album "The Beatles" (also known as "the White Album"). Written by Paul McCartney and credited to Lennon–McCartney, the song was previously covered by such acts as MÖTLEY CRÜE, AEROSMITH, U2, OASIS and SIOUXSIE AND THE BANSHEES.

McCartney was inspired to write "Helter Skelter" after reading an interview with THE WHO's Pete Townshend where he described their September 1967 single, "I Can See For Miles", as the loudest, rawest, dirtiest song THE WHO had ever recorded.

Paul told Radio Luxembourg in a November 1968 interview: "I'd read a review of a record where it said, 'And this group' — it was about some group I don't remember — 'this group really goes wild, there's echo on everything, they're screaming their heads off.' And I just remember thinking, 'Oh, it'd be great to do one like that. Pity they've done it. Must be great — a really screaming record.' And then I heard their record and it was quite straight, and it was sort of very sophisticated. It wasn't rough and screaming and tape echo at all. So I thought, 'Oh, well, we'll do one like that, then.' And I had this song called 'Helter Skelter' which is just a ridiculous song. So we did it like that, because I like noise."