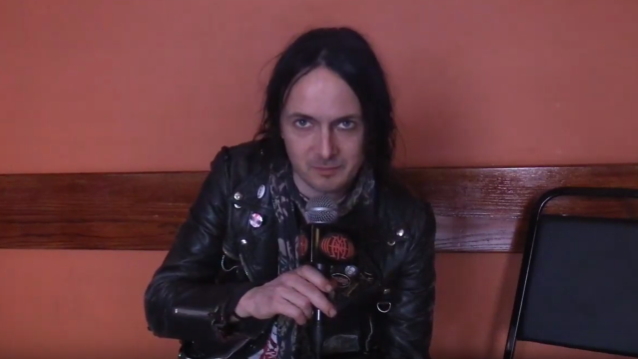 WATAIN Frontman: 'I Really Enjoy' Having A Different Stage Setup Every Night

WATAIN frontman Erik Danielsson was recently interviewed by Heavy New York. You can now watch the chat below.

Asked if WATAIN is sometimes forced to adjust its stage show based on the differences in the sizes of the venues that it plays, Erik said: "It's not really an issue. I think it's a challenge that we value. Because I see… Our friends in [fellow Swedish band] GHOST, for example, are now on this arena tour — beautiful stage setup, fucking big-ass show — but it's exactly the same setup every night, the amps are exactly in the same spots every night. There's something with that that I… I don't know. It's great, but I really enjoy doing kind of a different setup every night, because it puts you a bit on a guard and things become a little bit unpredictable and there's more room for disaster, really. That's what I like about it… The fact that it's different every night, it somehow adds rather than takes away from my own experience, at least."

WATAIN supported MORBID ANGEL on a month-long trek, dubbed "The 2019 USA Sickness Tour". The trek kicked off on November 21 in Houston, Texas and ended on December 21 in Ft. Lauderdale, Florida.

On the day the tour commenced in Houston, WATAIN published a long Facebook post explaining that officials from U.S. Customs and Border Protection had detained guitarist Pelle Forsberg a week earlier in Atlanta after he had flown in from Mexico. In Forsberg's absence, Alvaro Lillo switched from bass to guitar, and Danielsson assumed bass duties. Guitarist Hampus Eriksson and drummer Emil Svensson round out the quartet.