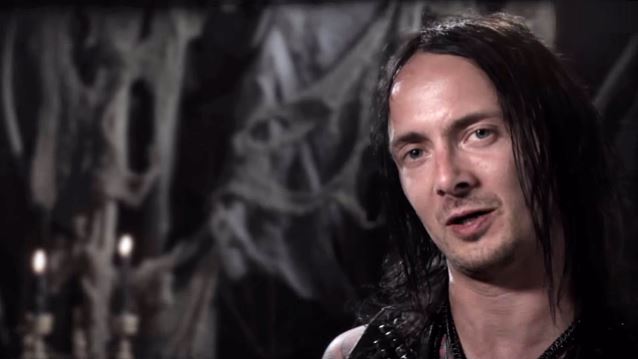 In a brand new interview with Metal Recusants, vocalist Erik Danielsson of Swedish black metallers WATAIN was asked why he thinks black metal never took off in the U.S. in the way it did in Europe.

"This is a matter for which I could speak for a long time about, but simply put I think it has to do with the fact that America has a different set of basic cultural codes that simply does not allow for underground cultural anomalies to become more than that," he responded. "Needless to say, though, the U.S. has spawned some of the most interesting and groundbreaking bands through the ages: MISFITS, COVEN, VON, NECROVORE, GG ALLIN, GUNS N' ROSES, METALLICA, NUCLEAR DEATH, SWANS, ORDER FROM CHAOS, to name a few. But I think black metal was simply not entirely compatible to the U.S. way, which is also why it still is considered something quite 'exotic' and 'foreign' there. Then again, there are also examples of bands that are exceptions to the rule, like BLACK WITCHERY and NEGATIVE PLANE, for example."

WATAIN made headlines in June 2014 when Erik Danielsson reportedly drenched the audience at a New York concert with a goat skull full of animal blood. Asked if he thought the incident was blown out of proportion by the local media, Erik said: "If you take into consideration the ceremonial context in which the blood was 'thrown,' no, it is not blown out of proportion. But that was, of course, not the point of focus in the 'news reports.' They were more focused on whatever tongue-in-cheek wittiness they could produce in their 'articles' to hide their fear and confusion. Of course, I spit disrespectfully at such uninspired sensationalism, but then again, who wins in the end?"

In a recent interview with OC Weekly, bassist/vocalist Glen Benton of Florida death metallers DEICIDE was asked for his opinion on European black metal bands like MAYHEM or WATAIN, who are publicly and overtly Satanic with their music and stage shows. "Well I'm aware of them, and we've played shows with BEHEMOTH before," Glen replied. "They are cool guys, but I could give two shits about their performances or whatever. They do their thing and it's cool for them. As far as WATAIN and their meat-throwing bullshit on stage, it's nothing new; we were doing that years ago at our shows."