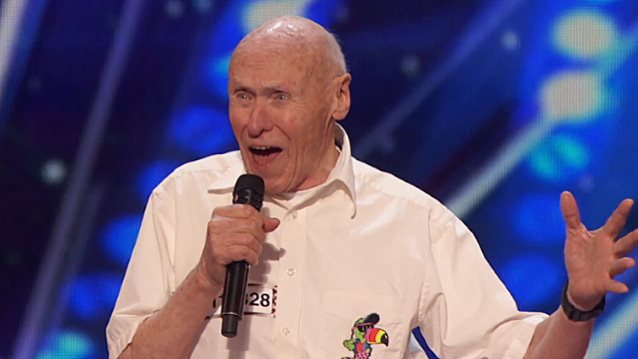 According to AOL.com, an 82-year-old contestant left the judging panel gobsmacked and the entire audience in disbelief as he sang DROWNING POOL's hit song "Bodies" during his appearance on the new season of reality show "America's Got Talent".

John Hetlinger, a former Navy pilot and program manager for the instrument that repaired the Hubble Space Telescope, told the judges that after all of his incredible jobs, getting onto "America's Got Talent" "would be the high point of [his] life and many careers."

You can now watch Hetlinger's performance below.

Hetlinger, who hails from Broomfield, Colorado, had previously shared video clips of him singing "Bodies" via his YouTube channel (see below).

Catch the new season of "America's Got Talent" Tuesday on NBC at 8/7 central.

"Bodies" was the lead single from DROWNING POOL's debut album, "Sinner", which came out in 2001. The band's most popular track, it has been featured in various films, TV programs, and advertisements since its release. The song remained DROWNING POOL's highest charting single until "37 Stitches" premiered in fall of 2008.

"Bodies" was reportedly used by interrogators at the Guantanamo Bay detention camps in 2003. It was repeatedly played over a 10 days period to "stress" Mohamedou Ould Slahi during interrogations while he was "exposed to variable lighting patterns" at the same time.