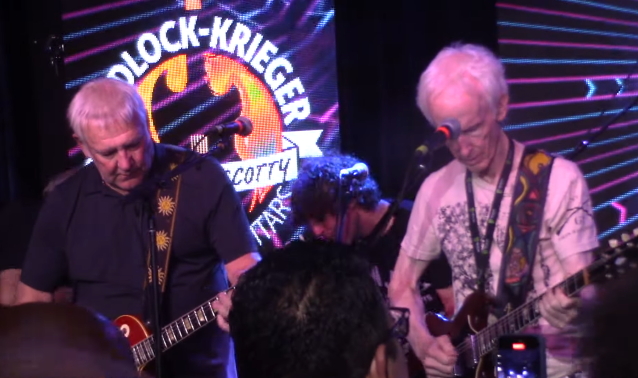 Video of Lifeson and former THE DOORS guitarist Robby Krieger performing SANTANA's "Evil Ways" with vocalist Andy Vargas at this year's Medlock-Krieger benefit show can be seen below.

In 2007, Medlock, a renowned sports artist, and Krieger started a charity golf tournament. After raising money for the Tillman Foundation during the first three years, Medlock and Krieger made St. Jude Children's Hospital the main beneficiary after Medlock was paired with St. Jude CEO Richard Shadyac at another golf tournament.

Lifeson made his mark on the music industry over 50 years ago, redefining the boundaries of progressive rock guitar. His signature riffing, copious use of effects processing and unorthodox chord structures befitted him the title by his RUSH bandmates as "The Musical Scientist." While the bulk of Lifeson's work in music has been with RUSH, he has contributed to a body of work outside of the band as a guitarist, producer and with the release of his 1996 solo album "Victor", a solo artist. Lifeson ranks third overall in the Guitar World readers' poll of "100 Greatest Guitarists" and is also included in Rolling Stone's "100 Greatest Guitarists Of All Time."