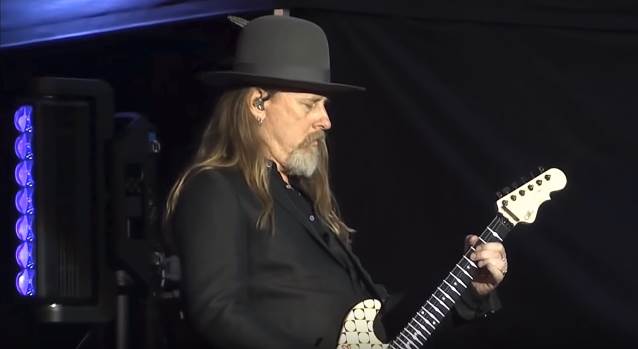 ALICE IN CHAINS dedicated the song "Nutshell" to Vinnie Paul Abbott during the band's June 24 performance at Hellfest in Clisson, France.

Cantrell told Billboard that he first met Vinnie Paul and his brother, late PANTERA guitarist "Dimebag" Darrell Abbott, in the mid-1980s in Texas. "I graduated in '84 and was going to winter semester of college, and then got the bright idea to put school off for a year and try to put a band together with a bunch of buddies of mine," he said. "So we drove to Dallas in a van and got jobs. We jammed and went to clubs at night. One of the clubs we went to was a place called Cardi's in Houston. They had rock bands all the time — I saw YNGWIE MALMSTEEN'S RISING FORCE, TALAS, all sorts of cool fucking bands. PANTERA was one of the bands I saw there. I remember talking to Dime after the show, just about gear and about how much I enjoyed how he played. I thought he was an amazing guitarist and he turned out to be an even better person. That started a long, long friendship… I remember talking to [PANTERA bassist] Rex [Brown] and Vinnie that night, too."

Vinnie Paul passed away on Friday (June 22) at the age of 54. He apparently died in his sleep at his home in Las Vegas. No cause of death was given at press time, but sources close to the drummer told the Las Vegas Review-Journal that he suffered a "major heart attack."

Vinnie's body had been turned over to the medical examiner to determine an official cause of death, after which his body will be flown to Texas to be buried between his mother and brother.