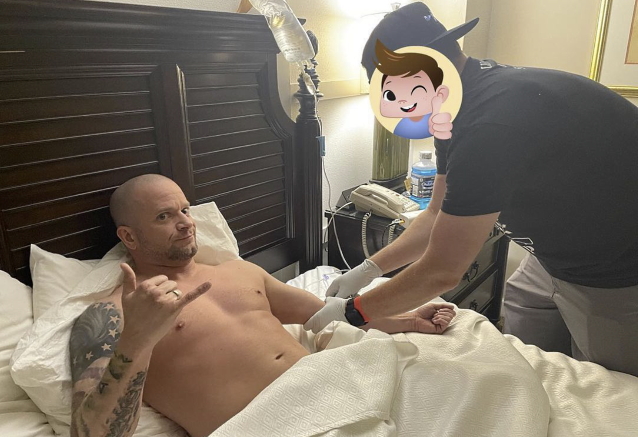 Watch: ALL THAT REMAINS Performs Without Stomach Bug-Suffering PHIL LABONTE In Fort Lauderdale

ALL THAT REMAINS was forced to perform without singer Phil Labonte last night (Thursday, May 5) at Revolution Live in Fort Lauderdale, Florida after he "caught a stomach bug".

ALL THAT REMAINS is celebrating the 15th anniversary of its breakthrough album, "The Fall Of Ideals", on the current tour, which kicked off on March 12 in Worcester, Massachusetts, and is scheduled to run through May 20 in Hartford, Connecticut. MISS MAY I, VARIALS and TALLAH are serving as support on the trek. ALL THAT REMAINS is performing "The Fall Of Ideals" in full on this tour.

On Thursday, Labonte took to social media to write: "Ft Lauderdale I have some terrible news. I have caught a miserable stomach bug and I will not be performing with ALL THAT REMAINS tonight at @RevolutionLive. But the show must go on! The band is there and will be performing with some surprise vocalists and even some fans that are currently signing up to sing some ATR songs to help save the show!

"I can't tell you how sorry and upset I am. I feel terrible but in my current condition I am not gonna be able to sing. I love you Ft Lauderdale and I'm wicked sorry."

Late Thursday, Labonte returned to his Instagram to share a photo of him being tended to by a first responder. He wrote in an accompanying message: "The very friendly first responder that came to give me an IV requested anonymity so I of course will oblige. Thanks Doc! Hoping this moves the bug along and I'm better tomorrow. Thanks to everyone that sent a get well message!"

"The Fall Of Ideals" was reissued last November. The best-selling title features such fan favorites as "This Calling", "Six" and "The Air That I Breathe".

Originally released in 2006, "The Fall Of Ideals" launched a new era for ALL THAT REMAINS — finding the band moving away from the death metal of their first two albums (2002's "Behind Silence And Solitude" and 2004's "This Darkened Heart") and settling into the melodic metalcore that defined their career. "The Fall Of Ideals" also introduced fans to the band's longtime bassist Jeanne Sagan and marked their only album to feature drummer Shannon Lucas. The newcomers joined founding members Labonte (vocals) and Oli Herbert (lead guitars),as well as rhythm guitarist Mike Martin.

ALL THAT REMAINS' current lineup consists of Labonte and Martin, as well as drummer Jason Costa and lead guitarist Jason Richardson.

It was fun Miss may I killed it. The main vocalist for all that remains was sick and couldn’t sing tonight.

Posted by Lismar Rodriguez on Thursday, May 5, 2022