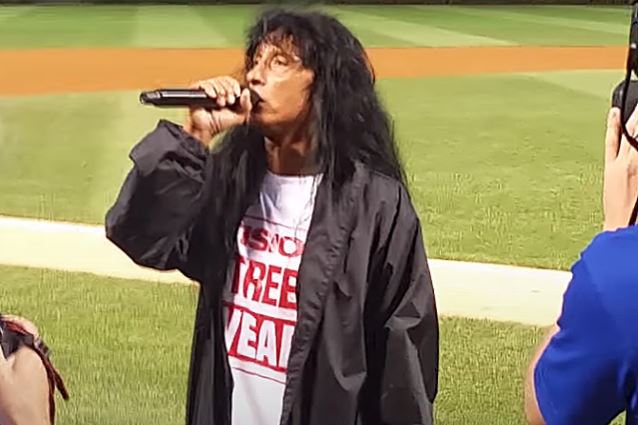 ANTHRAX frontman Joey Belladonna sang the U.S. national anthem before a baseball game between the Chicago Cubs and the Cincinnati Reds at Wrigley Field in Chicago, Illinois on Wednesday, September 21. Video footage of his appearance can be seen below.

Back in December 2004, Belladonna received poor reviews for his performance of "The Star-Spangled Banner" at the Minnesota Vikings vs. Seattle Seahawks National Football League (NFL) game at the Minneapolis Metrodome.

"I knew it was going to be a screwy afternoon when the national anthem singer — a scraggly-haired relic from an '80s heavy metal band — butchered the words," Tom Powers of the St. Paul Pioneer Press wrote at the time. "And that's hard to do because they are displayed on the jumbo scoreboard."

ANTHRAX bassist Frank Bello told Metal-Rules.com in a recent interview about Belladonna: "I have to tell you and this is not a kiss-up to Joey but he's better now than he has ever been. I stand on stage with him every night and the dude is just a phenomenon. I never heard of any singer that doesn't warm up and can still sing like he does. I'm a background singer and have things that I do to prepare. He is so consistent, and I'm a fan of his voice. He has a gift from God, and it's a beautiful gift. I'm thankful to be in a band with him."

ANTHRAX has joined forces with SLAYER and DEATH ANGEL for a seven-week North American tour. The trek kicked off in Cleveland on September 9.

On the field at Wrigley. Legally. #awesome