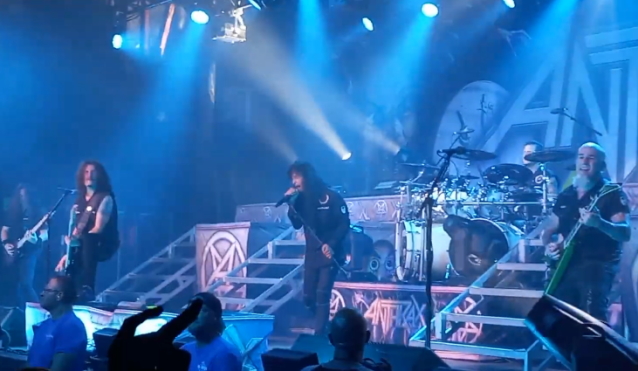 Watch: ANTHRAX Performs JOHN BUSH-Era Song 'Only' Live For First Time In More Than A Decade

ANTHRAX kicked off its North American tour with BLACK LABEL SOCIETY last night (Tuesday, July 26) at Van Buren in Phoenix, Arizona. ANTHRAX's 12-song setlist included the surprising addition of the John Bush-era track "Only", which hadn't been performed live since 2011.

Current ANTHRAX singer Joey Belladonna, whose most recent return to the band was officially announced in May 2010, was originally the lead singer of ANTHRAX from 1984 to 1992, and was considered part of the group's classic lineup (alongside Dan Spitz, Scott Ian, Frank Bello and Charlie Benante),which reunited and toured during 2005 and 2006. His voice was featured on over 10 albums, which reportedly sold eight million copies worldwide.

In a 2016 interview with Kazagastão, Belladonna said about his exit from ANTHRAX in 1992 before officially rejoining the band in 2010: "It's sucky that I was gone for that long, you know what I mean? I never understand that. It does bother me [that I was fired], even today, 'cause… We didn't miss a beat and I think we would have done… I can't imagine what we could have done along the way. No offense to anything else, but I just didn't see any reason for it."

Asked if he had heard any material ANTHRAX recorded with Bush during the time Belladonna was away from the band, Joey said: "I don't listen to it. I have no interest in it. I don't know… Something about it. It doesn't really appeal to me, for some reason. I mean, I enjoy that they play the way they do and everything, I just never… I never was interested in it. It wasn't anything against [Bush] at all."

Although Joey did perform "Only" live with ANTHRAX on a couple of occasions in the past, the track had been absent from the band's set for more than a decade before being played last night in Phoenix. "We've got enough songs [that were originally recorded with me on vocals]," Joey explained in the Kazagastão interview. "We don't even do [all the songs] we should… We've got all these other songs we could play. But now we've got new stuff, so now we've gotta try to fit in four or five brand new songs."

He continued: "I always like to look at it like… I remember when [Sammy] Hagar came in [after joining VAN HALEN], he had to do the old stuff. But when [David Lee] Roth came back, he wasn't gonna touch anything, even though he probably would have a hard time doing it. So we've got enough material; I don't need to go back. I'd just as soon leave that alone. I mean, once in a while I get people complaining, and then after a while, it got really old too. I hate that whole thing, 'cause we're not even the same… We happened to be in the same band, but it's a completely different thing. And who's judging? What's the deal with that? To think that what he was doing, that he could have done what I did in the beginning, I don't believe that."

Joey went on to say that he dislikes being compared to any other other ANTHRAX singers. "That's what I hate about the whole thing," he said. "I hate that there was even anybody else in there that I have to… But now I just don't care about it — I really don't — 'cause I can't. To me, it's just a bunch of hype. It sucked in the beginning; it really did."

In a 2017 interview with Metal On Loud, Joey was asked how he feels about the music ANTHRAX recorded while he was out of the band. He said: "It seemed good. I don't know. If I was to compare it, I didn't hear anything that we were doing that wasn't as good [as what they ended up doing with Bush]. I didn't hear anything that blew me away. I thought the music end of it was good, John's decent, but just the overall thing… I think we had something cool there, and I didn't hear that [in the music they made with John]. But that wasn't meaning it wasn't good; it just wasn't my idea of better, being better about it. It was just different, you know? I enjoyed the style that they were trying to dig into. I think they kind of straightened it all out a little bit, but it wasn't as thrashy in some ways sometimes too. I don't know. It gets crazy after a while when you're trying to explain it all. It's, like, it was what it was, you know?"

In one of the video testimonials to coincide with ANTHRAX's 40th anniversary in 2021, current and former members of the band reflected on Belladonna's original departure and Bush's addition as his replacement.

Regarding the decision to part ways with Belladonna, Ian said: "By the time we finished the year-and-a-half touring cycle — 20, 21 months of touring cycle, and then '[Attack Of The] Killer B's' comes out. I think the last thing we did together as a band with Joey was [our appearance] on [the] 'Married With Children' [TV show]. And then it wasn't long after that when we made the change. But it wasn't a quick decision. We were very much a united front, the four of us. Because otherwise it wouldn't have happened.

"There's never an easy way to talk about this stuff," he continued. "Certainly when you're in the thick of it, when it's happening, it's horrible when you're having to make a decision like this. But it just really came down to, creatively, we all just felt like there was just no way for the band to move forward. We had just hit a wall. It was the heaviest decision in the history of the band, certainly. And even that I feel like doesn't give it the weight that it needs. And there was never anything personal with Joey — it was never personal with him. It just really came down to the creative ability for the band, honestly, to move forward. And I hate that it's something that happened.

"Obviously, things are meant to be," Scott added. "I am somewhat of a spiritual person. I've seen and done enough in my life to know that sometimes shit doesn't just happen randomly. The way everything worked out in the end, with Joey coming back in 2010, and the band, for the last 11 years, being creatively better than we've ever been and in a better place than we've ever been, I have to say that I really believe that it all worked out for some reason. That doesn't make it any easier on Joey certainly; there's nothing I can say that ever would."

Bello said about Belladonna's exit from the group: "It's so strange for me to even talk about this now, because Joey's back in the band now, and it's like he's never been gone.

"It was a hard thing when Joey was out," he admitted. "It was a change, but I think it was best for the band 'cause of where we were going. It was a hard decision. I think we were going in a different way musically, and you could hear it."

Added Benante: "The 1991 me was more arrogant than I am now. Because the problem is I love Joey so much, and at the time we were different people doing it, and we felt this was the only thing for us to take us into the next level or the next chapter of the band. Yeah, it was tough."

Ian previously opened up about the decision to fire Belladonna three decades ago during a 2016 appearance on the "WTF With Marc Maron" podcast. He stated at the time: "I just truly didn't have the patience anymore. I think my biggest problem was I was writing the words, and I couldn't deal with the fact anymore that someone else was singing my lyrics, but I couldn't sing; there was no way I could be the singer of ANTHRAX. I think it really, really did come down to that — that I couldn't stand it anymore. These are my words, these are my feelings, it's my emotions, and you're not me. And even learning the songs and hearing them back, that's not how I hear it in my head. 'No, no. Like this. Like this. Like this. Like this.'"

He continued: "My solution at the time was turning around to the rest of the band and saying, 'It's either [Joey] or me.' I pulled the same shit Neil Turbin [former ANTHRAX singer] pulled years before that. I said, 'I can't do this again. We need to make a change.' And it wasn't just me holding the gun. Everyone was on the same page. Everyone felt like what we had done as ANTHRAX in the '80s into the early '90s, we had already moved past that. The sound was changing.

"If you listen to 'Persistence Of Time' [1990], musically, that record has more to do with 'Sound Of White Noise', the first John Bush record, than it has to do with 'State Of Euphoria' [1988], the previous ANTHRAX album. Musically, we were already going somewhere else, but Joey, for us, I guess at the time, felt like, 'He's not representing us anymore.'"

Ian went on to say that he has since come to see Joey's unique vocal contributions in a different light than he did more than twenty years ago. "Of course, I spent a year of my life writing a book ['I'm The Man: The Story Of That Guy From Anthrax'] and looking back on that time and really kind of getting back into those shoes, and… we should have given the guy a shot," he said. "Why we didn't give him the shot, I really don't know why we weren't able to… Because I even remember, I remember Jonny Z, our manager, he was, 'Are you sure? Are you sure this is the decision you wanna make?' 'Yes, yes, yes.'"

The guitarist added that at least part of the reason ANTHRAX made a singer change was to take the sound in a heavier direction, something that they didn't think was possible with Belladonna at the helm.

Bush told Metal Talk about the task of replacing Joey Belladonna in ANTHRAX back in 1992: "I respect Joey Belladonna; he did great for ANTHRAX in his heyday and in the years that he made records and they were popular. You know, I think I just went out and did it from my heart and just said, 'Hey, I'm gonna go out and kick ass and sing to the best of my ability.' And I think we made some great records. I just think they were different records than what ANTHRAX did in the '80s."

ANTHRAX's latest album, "For All Kings", which features Belladonna, came out in February 2016 via Nuclear Blast.

ANTHRAX's setlist for the July 22, 2022 concert at Van Buren in Phoenix, Arizona: