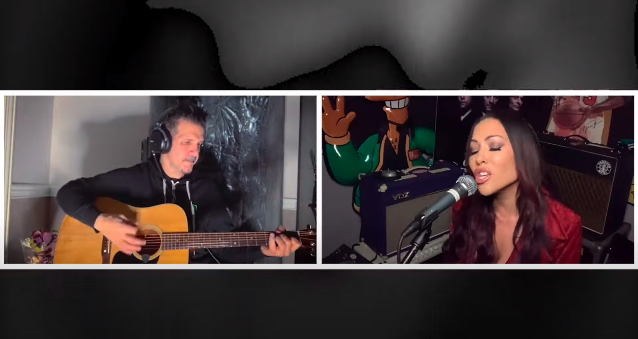 Benante uploaded a video of the performance to his YouTube channel, writing in an accompanying message: "We miss you, Tom Petty! One of the American greats! Not only a stellar multi instrumentalist but the king of story telling through his lyrics. His songs are familiar, yet they never sound dated. Hearing them after awhile just reminds you of how good he was!

"What you may not know about Petty was that he was an advocate for fair treatment of musical artists and fans alike. He fought the record industry to avoid his contract be transferred, saying he didn't want to be 'bought and sold like a piece of meat,' and later fought to keep the prices of his albums down so that everyone could afford him.

"This song has always been a favorite of mine, the lyrics, the Jangly guitars, his voice... he and the HEARTBREAKERS wrote some catchy stuff .

"This one features the beautiful Carla Harvey of the BUTCHER BABIES and Ra Diaz from SUICIDAL TENDENCIES, they rule! Thanks to Andy Lagis for mixing and Dima Levanchuk for video editing - I [love] tom Petty #mikecampbell"

Petty died in October 2017 of an accidental overdose due to a mixture of medications. THE HEARTBREAKERS frontman passed away shortly after completing a tour celebrating the band's 40th anniversary. He was 66 years old.

TOM PETTY & THE HEARTBREAKERS were inducted into the Rock And Roll Hall Of Fame in 2002.

2016 saw Petty's induction into the Songwriters Hall Of Fame.