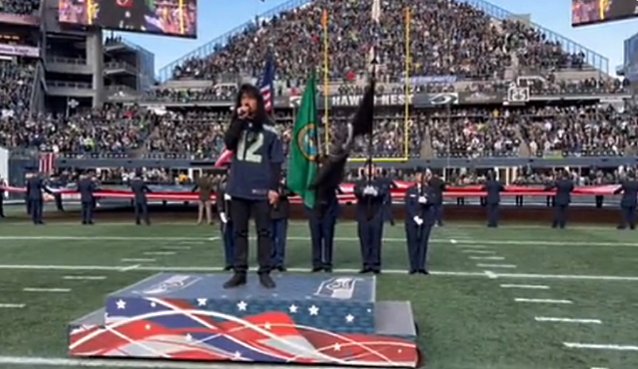 Earlier today (Sunday, November 27),ANTHRAX frontman Joey Belladonna sang the U.S. national anthem before the Seattle Seahawks game against the Las Vegas Raiders at Lumen Field in Seattle, Washington. Video of his rendition can be seen below.

Belladonna, who has sung the U.S. national anthem at a number of sporting events over the past several years, spoke to "Panini Unwrapped" about the experience of performing "The Star-Spangled Banner" in front of huge crowds of people, many of whom are unfamiliar with his name or the band's music.

"I just love doing the anthem," he said. "People get off on it. And I really respect the game and the anthem itself, so it's a pleasure to be able to be asked to be a part of that."

Asked how he would compare singing the anthem at a stadium to playing to large audiences composed of heavy metal fans, Joey said: "The anthem is even more tense, because you're all by yourself, everything goes quiet, and there's really no key to sing in. I just kind of go out there and just wing it, but I like to keep it traditional. But it is a very unnerving… Once it's ten minutes before they give you the okay [to go out there and sing], it's, like, 'Woah!' I've gotten nervous, but once you get going, you just focus on doing it."

Belladonna, whose most recent return to ANTHRAX was officially announced in May 2010, was originally the band's lead singer from 1984 to 1992, and was considered part of the group's classic lineup (alongside Dan Spitz, Scott Ian, Frank Bello and Charlie Benante),which reunited and toured during 2005 and 2006. His voice was featured on over 10 albums, which reportedly sold eight million copies worldwide.

In a 2016 interview with Kazagastão, Belladonna said about his exit from ANTHRAX in 1992: "It's sucky that I was gone for that long, you know what I mean? I never understand that. It does bother me [that I was fired], even today, 'cause… We didn't miss a beat and I think we would have done… I can't imagine what we could have done along the way. No offense to anything else, but I just didn't see any reason for it."

Belladonna rejoined ANTHRAX for the 2010 "Big Four" shows, in the process helping inspire a new wave of creativity, beginning with 2011's "Worship Music".

"I think the best decision we ever made was getting our relationship with Joey back and just kind of repairing it and putting everything aside and just being on the same page again and just making music again that really means a lot to us," ANTHRAX drummer Charlie Benante told "Rock Talk With Mitch Lafon". "And I think that's a big thing. And all the insecurities and all the idiosyncracies and all the bullshit that goes with it, just fucking throw it out the window, because it doesn't mean… It never really meant anything, but back in the day, it meant more. Nowadays, it doesn't mean shit."

As previously reported, Belladonna will relaunch his JOURNEY tribute band called BEYOND FRONTIERS (formerly JOEY BELLADONNA'S BEYOND THE BAND and JOURNEY BEYOND) with three East Coast shows in December.