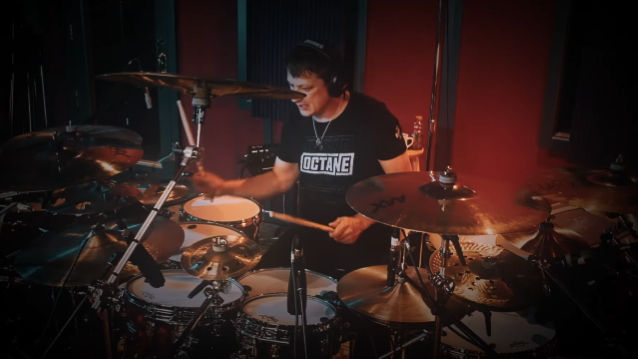 KORN drummer Ray Luzier recently launched a "studio drum cam series" on his YouTube channel where he performs songs that he's recorded on past records shot from multiple camera angles. Check out some of his earliest clips below.

In a recent interview with the "Drum Candy" podcast, Luzier explained his decision to relocate his family to Franklin, Tennessee nearly a decade ago. He said: "I moved [to the Nashville area] — June [2022], it'll be eight years here, which is nuts, 'cause I'm still in a band based in Bakersfield, California. I always joke with people, 'I have a two-thousand-mile commute to work.'

"When Head [KORN guitarist Brian Welch] rejoined the band in 2013, I said to him first thing, 'cause he lived out here [in Nashville], and I said, 'When are you gonna move back to Cali?' And he said, 'I'll never live in L.A.' And I said, 'How are you gonna be in the band?' And he was, like, 'There's airports and Internet, isn't there?' And right at the time, [my wife and I] had just had our first kid; it was almost three years into it. And I was thinking to myself, 'Man…' 'Cause my wife never really got L.A. And I was, like, 'Man, I wonder if we can get out of here,' if it was feasible enough. So I got permission from the band."

Luzier, who was raised just outside Pittsburgh, Pennsylvania before moving to Los Angeles in 1988 to pursue a career in music, added: "Jon [KORN singer Jonathan Davis] is really adamant about stuff on the cuff, like, 'Ray, come up here. Drive up to [Bakersfield]. I've got this idea. Play drums on it and drive back down.' It was a two-hour commute for me when I lived in L.A. This only happened a few times where I've had to jump on a plane the next day and go out there. But for the most part, [Head] is right. We meet at the airport. If we do a European tour, we meet at the airport. If we do a record, we all meet in Bakersfield. I have a four-hour flight. That's nothing to me; I live on airplanes."

Luzier and his wife started dating in 2009 after she interviewed him while on assignment for Rivalry Nights. It was one of his first interviews as a member of KORN, having spent the initial two years of his tenure with the group as a session drummer.

Ray lived in Los Angeles for 16 years before moving to Nashville.

KORN's latest album, "Requiem", was released in February via Loma Vista Recordings. The LP was produced by Chris Collier and KORN.